Posted By Clarksville Online News Staff On Wednesday, September 19, 2012 @ 1:30 am In Technology | No Comments

Greenbelt, MD – Over the next few weeks, an ER-2 high altitude research aircraft operating out of NASA’s Wallops Flight Facility in Wallops Island, VA, will take part in the development of two future satellite instruments.

The aircraft will fly test models of these instruments at altitudes greater than 60,000 feet to gather information researchers can use to develop ways to handle data future spaceborne versions will collect. 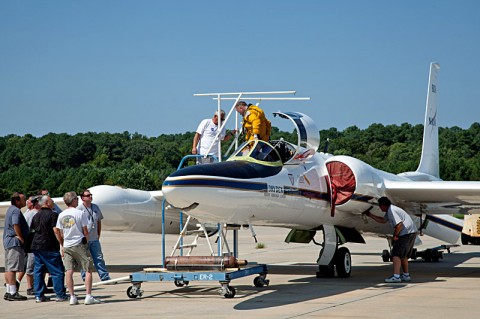 NASA Wallops will be the temporary home of one of NASA’s ER-2 research aircraft. The ER-2 from NASA’s Dryden Aircraft Operations Facility in Palmdale, CA, will carry two instruments, the Cloud-Aerosol Transport System (CATS) and the Multiple Altimeter Beam Experimental Lidar (MABEL).

CATS and MABEL are test beds for instruments to be carried by future satellite missions, and because they are both high-altitude laser instruments they will share space on the ER-2 in part as a way to lower costs for both teams. The ER-2’s deployment began on September 7th and will end no later than September 27th. 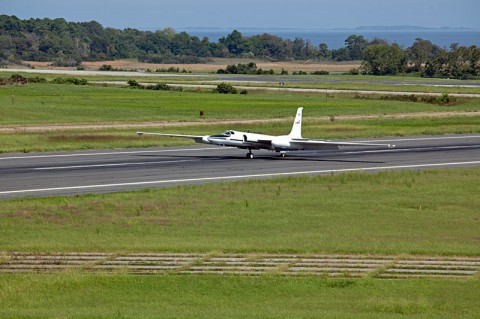 CATS is a high spectral resolution lidar that uses a laser to gather data about clouds and aerosols. Aerosols are tiny particles in the atmosphere such as dust, smoke or pollution. Similar instruments on existing satellites, such as CALIPSO, can detect aerosol plumes, but cannot determine what they are made of.

“You have to make some assumptions,” said atmospheric scientist Matt McGill at NASA’s Goddard Space Flight Center in Greenbelt, MD. CATS can better detect aerosol particle properties, allowing researchers to better determine what kind of aerosols the plumes are made of and improve studies of aerosol transport and cloud motion. CATS was designed as a test instrument for the future Aerosol-Cloud Ecosystems (ACE) satellite mission, which is still in its planning stages, and a version of CATS will be installed on the International Space Station in mid-2013.

MABEL is a laser altimeter built to simulate the primary instrument on ICESat-2, scheduled for launch in 2016. ICESat-2 will study land and sea ice and vegetation. In April, a NASA ER-2 carrying MABEL flew surveys of land and sea ice out of Keflavik, Iceland, which yielded large amounts of data that researchers are using to develop algorithms for ICESat-2.

This time around, MABEL will measure vegetation along the U.S. East Coast, which will provide data useful for developing methods for determining the amount and thickness of vegetation coverage. This involves measuring both the tops of tree canopies and ground level at the same time, which Kelly Brunt, a cryospheric scientist at NASA Goddard, said is a challenging task. The ICESat-2 team’s need to measure deciduous forest canopies is in part of why these flights will operate out of Wallops. “We can’t get the type of vegetation canopy we need flying out of Dryden,” Brunt said. The ER-2 will be surveying forests and grasslands from Maine to the Florida Everglades.

In addition to CATS and MABEL, the ER-2 will carry a Cloud Physics Lidar (CPL) instrument that will be used to detect clouds and aerosols that could hinder MABEL’s performance. “We need to know what’s between MABEL and the surface,” said McGill.

These flights will coincide with NASA’s Hurricane and Severe Storms Sentinel, or HS3, campaign. HS3 is an airborne mission where a NASA Global Hawk unpiloted aircraft will overfly hurricanes and severe storms to measure properties such as wind, temperature, precipitation, humidity and aerosol profiles.

One of the instruments it carries is a CPL identical in design to the one on board the ER-2. The Global Hawk is capable of flying at altitudes greater than 60,000 feet for more than 28 hours at a time and will be operated by pilots back on the ground.

The flights are sponsored by the Earth Science Division of NASA’s Science Mission Directorate in Washington.

For more information about MABEL, visit:

For more information about CPL, visit: