The victory boosted Murray State to 3-3 overall and 2-1 in Ohio Valley Conference play while Austin Peay remains winless, slipping to 0-6 overall and 0-4 in OVC play.

The Governors cut a 17-7 deficit to three points right before halftime when Jake Ryan hooked up with Terrence Oliver for an eight-yard TD pass with 59 seconds left in the half. But that momentum was thwarted when Murray State, taking advantage of a personal foul penalty, scored when Brockman connected with Ja-Von Trotter for a 12-yard score with 21 seconds left.  As a result, instead of trailing 17-14 heading to half, the Govs were down 24-14.

That started a string of 35 unanswered points by the Racers, with Brockman accounting for two TD passes during the stretch.

Brockman, a preseason All-American and on the Walter Payton Award watch list, ran his record to 4-0 against the Govs as Racers quarterback. He was 14-of-14 in the first half and 22 of 24 at halftime. But it was his third-quarter play that elevated the Racers to their fifth straight series win.

Brockman was the second straight quarterback to pass for more than 400 yards and toss five TDs against the Govs-Jimmy Garappolo threw for 453 yards and five TDs last week.

His favorite target was Walter Powell, who had nine catches for 179 yards and two TDs, the same number of TD receptions by Dontel Watkins. 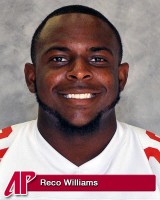 For the Governors, freshman running back Reco Williams rushed 21 times for 110 yards, making it four times this season the Governors have had a rusher gain more than 100 yards.

Quarterback Jake Ryan, despite being victimized by several drops, still completed 25 of 40 passes for 241 yards.

Defensively, linebacker Josh Carroll was credited with 15 tackles, including two for loss.

Coach, any positive thoughts on tonight’s game?
“Our offense did well, but we haven’t stopped anyone in two weeks. We’ve given up over 100 points in the last two games. To be able to compete, we are going to have to change that. Our kick return game wasn’t bad, and our punter [Ben Campbell] did a great job out there tonight. We missed two crucial field goals. There were positives, but we didn’t score any points in the second half and we can’t overlook that.”

The passing game has been our Achilles Heel these last two weeks.
“We allowed them to run down the middle of the field wide open and make big plays. Stopping those was a big focus of our practices this week, but we didn’t get it done tonight. We need to look over the film and see who is doing what and decide who needs to be playing more and who needs to be on the bench. We have to evaluate that and get it together these next couple of weeks.”

The second quarter has been good for us, but outside of the second quarter we aren’t doing much. Why do you think this is?
“We had to start our first drive of the third quarter on our own 12 yard line. When you have to go 88 yards, play calling has to be different and a little strange. We frequently had to make drives of around 70 or 80 yards. Jake Ryan, for the second week in a row played a great game. He should have had about 35 completed passes, but he had quite a few guys with drops. Those plays were at crucial times. If we could make those plays it could be a completely different game.”

Thoughts on our receiving game
“Devin (Stark) is a great player, but when he got dinged at the beginning of the fourth quarter, that hurts us because we don’t have a whole lot of depth at wide receiver. We need some other guys to step up and make some catches. We can’t move the ball up and down the field efficiently with all these drops we’re having.”

Thoughts on running game
“Reco Williams and Terrence Oliver both did exactly what they were supposed to do. They both played great. Terrence was really impressive considering he played almost every down, either in the backfield or in the slot.”

Thoughts on next week
“Between EKU’s loss last week and us beating them last year, they will really be coming for us. They have a really good defense and they are running the football well. We will have to play much better next week”

Final Thoughts
“There’s not much to say, we just gave up too many points. We have to get more points on the board and be able to stop them.”