Sophomore Liz Landon moved into the libero role while sophomore Hillary Plybon moved back into the starting six as middle blocker as the Lady Govs continue to search for the right combination in the front row. 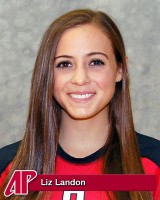 “Liz was great and made a big difference at libero,” said Mott. “She helped solidify our passing and that showed. Cami (Fields) was instrumental in running our offense and the better passing effort certainly helped. We executed much better today all around.”

The Lady Govs had to first overcome a sluggish start in the opening set. The effects of an early wake-up call and drive from Cape Girardeau, MO, to Martin for the 11:00am start showed as Austin Peay had to battle a feisty UT Martin squad through 15 ties and seven lead changes before securing the 25-23 victory.

The second and third sets were much more one sided as Austin Peay trailed only briefly early in each set. The Lady Govs scored 17 kills in a dominating 25-16 second set win as the defense held the Skyhawks to a .000 attack percentage (7 kills and 7 errors). 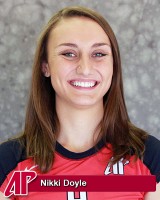 UT Martin’s offense couldn’t get on a roll in the third set with 11 kills and a .104 attack percentage and Austin Peay posted a 25-21 win to end the match.

Senior outside hitter Nikki Doyle and sophomore outside hitter Jada Stotts each recorded 12 kills to lead Austin Peay. Plybon responded to the starting nod with 10 kills and a .556 attack percentage.