Nashville, TN – This week the Tennessee Titans (2-4) travel to Buffalo to take on the Bills (3-3). Kickoff at Ralph Wilson Stadium (capacity 73,967) is scheduled for noon CDT on Sunday, October 21st.

The Titans and Bills, two of the eight original American Football League rivals, have met on 43 prior occasions, including playoffs. Their rich history includes Tennessee’s “Music City Miracle” Wild Card win during the 1999 playoffs and a 32-point comeback victory by the Bills in a 1992 Wild Card matchup.

The Titans lead the series 27-16. They prevailed last season in Buffalo, as Chris Johnson rushed for 153 yards and a pair of touchdowns in a 23-17 win. It gave Johnson a combined 285 yards and four touchdowns in two career games versus the Bills.

The Titans will have 10 days to prepare for the Bills, following their October 11th win over the Pittsburgh Steelers on Thursday Night Football. Rob Bironas’ 40-yard field goal—his fourth of the game—with time expiring gave the Titans a 26-23 victory.

Matt Hasselbeck earned the win as the starting quarterback. Making his second consecutive start due to Jake Locker’s left (non-throwing) shoulder injury, Hasselbeck completed 24 of 44 passes for 290 yards. His five-yard touchdown pass to wide receiver Kenny Britt helped to tie the score with less than five minutes remaining, and he found tight end Jared Cook for a 25-yard gain to set up Bironas’ deciding kick.

Britt recorded four catches for 61 yards, while rookie Kendall Wright led the team with six receptions for 71 yards. Wright, the 20th overall selection in the 2012 NFL Draft, has led the team in receptions for four consecutive weeks. His 33 receptions this season rank first on the squad and first among all NFL rookies, and he also ranks first among rookies with 285 receiving yards.

Other notable performances against the Steelers included 91 rushing yards by Johnson, a momentum-changing interception by Jason McCourty and a blocked punt by Tim Shaw.

The Bills ended a two-game losing streak with last week’s 19-16 overtime win at the Arizona Cardinals. Safety Jairus Byrd’s second interception of the contest put Rian Lindell in position for the game-winning 25-yard field goal in the extra period. The four AFC East clubs (Bills, Patriots, Jets and Dolphins) are now deadlocked with 3-3 records in 2012. 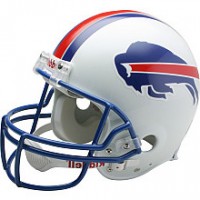 During the offseason, the Bills made one of the NFL’s premier acquisitions, signing free agent defensive end Mario Williams from the Houston Texans. Williams is in his seventh NFL season and has 56.5 career sacks. He picked up two of the team’s five sacks against the Cardinals.

Titan-Bills Series At A Glance

RB Chris Johnson can record the 30th 100-yard rushing game of his career. He would join Earl Campbell (39) and Eddie George (36) as the only players in franchise history to reach the mark.

RB Chris Johnson needs 54 more rushing yards to reach 6,000 for his career. He would become the third player in franchise history to reach the mark, joining Eddie George (10,009) and Earl Campbell (8,574).

WR Nate Washington can extend his streak of consecutive games with at least one reception to 69 (55 games with the Titans).

The Titans and Bills contest brings together two of the original teams of the American Football League, both currently owned by the same visionaries who helped set in motion one of the most significant eras in football history. It was in 1960 that K.S. “Bud” Adams, Jr.’s then-Houston Oilers and Ralph Wilson, Jr.’s Bills became two of the eight teams that began play in the newlyformed league.

Adams and Wilson are the surviving members of the original group of owners, dubbed the “Foolish Club” for their choice to accept the seemingly-impossible task of competing with the National Football League. Ten seasons later, the burgeoning league’s success was more than apparent, as the AFL and NFL completed a historic merger.

In the regular season and postseason, the Titans and Bills have met a total of 43 times. The Titans hold a 27-16 advantage in the series, dating back to the inaugural AFL season. The momentum in the series has swung back and forth. From 1967 until 1978, the Oilers had a 10-game winning streak over the Bills, the longest streak in the series. From 1983–94, Buffalo controlled the series, going 8-3. But since then, Tennessee has won seven out of the last eight, including the last four and last year’s 23-17 decision in Buffalo.

The franchises have met three times in the playoffs, with Buffalo holding a 2-1 advantage in those meetings. The last playoff matchup between the two teams was in 1999, when the Titans defeated the Bills 22-16 in an AFC Wild Card game. In a play known as the “Music City Miracle,” Kevin Dyson returned a Frank Wycheck lateral on a kickoff return 75 yards for a touchdown with only 16 seconds left in the game, giving Tennessee the win. The Titans went on to beat the Indianapolis Colts and the Jacksonville Jaguars before falling to St. Louis Rams in Super Bowl XXXIV.

In Week 13 of the 2011 campaign, the Titans got 153 rushing yards and two touchdowns from Chris Johnson and withstood a late surge by the Bills en route to a 23-17 victory at Ralph Wilson Stadium.

Rob Bironas made three field goals for the Titans amid wind gusts of 20-25 miles per hour, and rookie middle linebacker Colin McCarthy recovered two fumbles for the game’s only turnovers.

Seventeen of Johnson’s toughest yards came on five total carries with less than three minutes on the clock and the Titans trying to hold on to their six-point lead. A seven-yard run for a first down helped the Titans burn nearly two minutes off the clock and forced the Bills to exhaust their timeouts.

Brett Kern’s 57-yard punt, the fourth he placed inside the 20, helped pin the Bills on their own 15-yard line with 1:02 on the clock. Quarterback Ryan Fitzpatrick navigated the offense to the Tennessee 46-yard line, but four consecutive incomplete passes ended their hopes.

After Bironas made a 48-yard field goal early in the first quarter, the Bills offense responded to take the lead. After a pair of third-down conversions, they had a first down on the Tennessee 35-yard line. Spiller took a handoff from Fitzpatrick and raced down the left sideline. At the fiveyard line, safety Michael Griffin forced a fumble, and the ball bounced to the end zone. The initial ruling was that Spiller recovered out of bounds. However, the Bills challenged the call, and it was reversed for a touchdown.

The Titans answered immediately, as Johnson scored on a 48-yard run to put the Titans back in front 10-7.

The Bills then drove again into Titans territory, where they faced a fourth-and-three. As Fitzpatrick scrambled, McCarthy knocked the ball loose and then recovered for the Titans.

The Titans responded with their third score in as many drives. They marched 57 yards in six plays, scoring on a four-yard run by Johnson.

Dave Rayner capped a 12-play, 71-yard drive with a 27-yard field goal for the Bills, ending the scoring in the first half.

The Titans extended their lead to 20-10 in the third quarter. On the Bills’ first offensive play of the half, tight end Scott Chandler gained 22 yards on a pass from Fitzpatrick, but defensive tackle Sen’Derrick Marks stripped the ball. McCarthy recovered the fumble, and the Titans drove 64 yards in six minutes before Bironas booted a 27-yard field goal.

The Titans took another chunk of time off the clock in the fourth quarter. At the conclusion of a 13-play, 57-yard drive that consumed six-and-a-half minutes, Bironas made a 44-yard field goal. The drive featured a pair of third-down conversions after the Titans missed out on their first seven third-down attempts of the game. They were two-of-11 for the game on third down, while the Bills converted seven of 16.

With 8:55 remaining in the fourth quarter, the Bills began a 15-play, 80-yard drive that featured a pair of third-down conversions and two successful fourth downs. The latter included a two-yard touchdown reception by Stevie Johnson on fourth-and-goal from the two-yard line.

The Bills opted to kick off deep to the Titans, who were able to capitalize one last time on Johnson’s efforts.