HomeNewsClarksville Police arrest Man for Statutory Rape and another Man for Solicitation...
News

Both Involve the same Underage Girl

Clarksville, TN – On October 16th, 2012, Clarksville Police were alerted to a possible sexual encounter between a 14 year old girl and a 20 year old man.

The 14 year olds mother discovered her daughter was receiving explicit text messages from a man asking her if she would have sex with him. They had met on a social networking site. 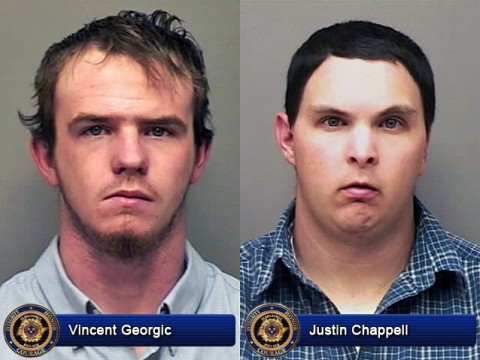 An investigation by Detective Rodney Lifsey determined that Vincent Cleveland Georgic had registered at a Holiday Drive hotel and had sexual intercourse with the 14 year old.

Additionally, it was revealed Georgic was aware of the age of the 14 year old. On October 26th, 2012, Georgic around 9:30pm was taken in custody without incident at his residence.

While conducting the investigation into the Statutory Rape, another man, Justin Chappell came to the attention of Clarksville Police after contacting Detective Lifsey via text messages, who was posing as the juvenile female.

Chappell had also met the juvenile on a social networking site at an earlier time. Chappel requested photographs of the juvenile performing various sexual acts. Conversely, Chappell provided several photographs of himself including one of his penis. Chappell also arranged a meeting to have sexual intercourse with the juvenile and a 16 year old friend.

On October 26th, 2012, around 6:30pm, Chappell was taken into custody by Police at a local motel where he was supposed to rendezvous with the juveniles.