Austin Peay, which finished as the Eugene Regional runner up in last season’s NCAA tournament, will face six NCAA participants this season with four slated to visit Clarksville. 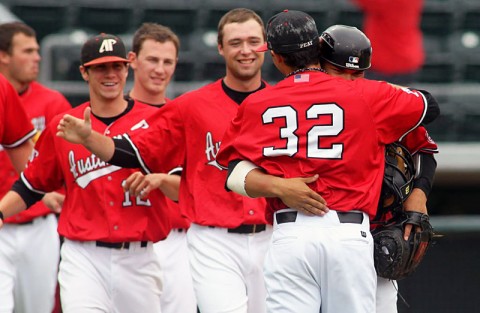 The Governors will play Indiana State in a home-and-home series, host Michigan State in a three-game series and host Creighton as part of the 2013 Riverview Inn Classic. APSU also will visit both Mississippi State and Kentucky in a return of Southeastern Conference opponents to its schedule. In addition, the Govs will host Belmont, the newest member of the Ohio Valley Conference series, in a three-game series.

“Scheduling is done so far in advance nowadays, so you never really know for sure how your competition will be from year to year,” said McClure. “With that said, I like how it has worked out this year that we will play 11 games against six teams that made the NCAA tournament last season.  We look forward to the challenge, but have a lot of work to do between now and then.”

The Govs will play 33 games at Raymond C. Hand Park in 2013, including 15 of their first 17 contests. The campaign opens with a three-game series against Iowa, February 15th-17th. Austin Peay also will host Illinois State (February 22nd-24th) and Michigan State (March 1st-3rd) in three-game weekend series at home.

The Govs will open the home portion of their OVC schedule when they host Jacksonville State, March 22nd-24th. APSU’s home conference weekends will include Tennessee Tech (April 5th-7th), Belmont (April 19th-21st), Morehead State (May 3rd-5th) and the regular-season finale against SIU Edwardsville (May 16th-18th).

Midweek offerings will provide home-and-home series against Evansville, Indiana State, Lipscomb, Middle Tennessee, Southern Illinois and Western Kentucky. In addition, the Govs will travel to both Mississippi State (March 26th) and Kentucky (April 9th). A late trip to Memphis, May 14th, will wrap up the Govs non-conference slate.

“This year’s schedule will be extremely tough, for various reasons,” said McClure. “First, when looking ahead to this season we knew it would be a year we would have several talented veteran players returning who had been through some big games. So, it was my hope that we could handle the task of playing a very competitive schedule.

“Secondly, we always try to challenge our team by playing a very strong schedule in hopes that we will be battle tested when our conference season begins.”

Following the regular-season finale, the OVC tournament will be hosted May 22nd-26th at Pringles Park in Jackson, Tennessee. It will be the fourth consecutive season the event has been hosted at the home of the Jackson Generals, the AA affiliate of the Seattle Mariners.

“We believe if we can do well against the type of schedule we have this year our RPI has a chance to rise to the level where we can possibly get an at-large bid if needed,” McClure said. “More importantly we will have the opportunity to put ourselves in a position for a higher seed should we qualify for the NCAA Tournament again.”

Austin Peay returns the bulk of a team that won both the OVC regular-season and tournament titles in 2012, the second consecutive year it swept the league’s titles. Among the returnees will be infielder Jordan Hankins, who was a second-team ABCA All-South Region and first-team All-OVC selection. Second-team All-OVC outfielder Cody Hudson also returns. In addition, infielder Reed Harper, outfielder Rolando Gautier and pitcher Kacy Kemmer, each OVC all-tournament picks, return.