Trying to earn the coveted spurs of a Cavalry “Trooper”, Soldiers with 1st Squadron, 61st Cavalry Regiment, 4th Brigade Combat Team, 101st Airborne Division, a fire team moves into a support by fire position covered by the other fire team in the Movement to Contact lane during a Spur Ride, Oct. 24 to 25, 2012, as a Spur Holder observes their movement, commands and team work, at Fort Campbell, Ky. (U.S. Army photo by Staff Sgt. Todd A. Christopherson, 4th Brigade Combat Team Public Affairs)

The tradition of having to “earn your spurs” reaches back to the beginning of the cavalry. When green troopers first arrived at their new cavalry assignments, they were assigned a horse with a shaved tail. This led to the nickname “shaved tail” for newly assigned, spur-less Soldiers. 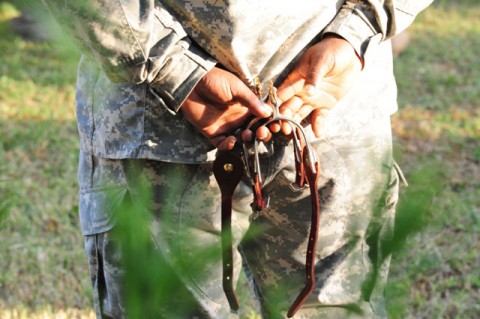 The Spur Ride is the only means of joining the Order of the Spur, besides a wartime induction. Conducting a Spur Ride varies but it is generally held over multiple days during which a Soldier must pass a series of physical and mental tests relevant to the Cavalry.

“Considering I have been in the unit for less than a month,” said Pvt. Damion Cephus, a Soldier with Alpha Troop 1st Sqdn., 61st Cav. Rgt., 4th BCT, 101st Abn. Div. “It made me feel real dedicated to the troop having earned my spurs.”

Earning your spurs holds a similar relationship for the cavalry as the Expert and Combat Infantryman Badge holds to the U.S. Army Infantry. 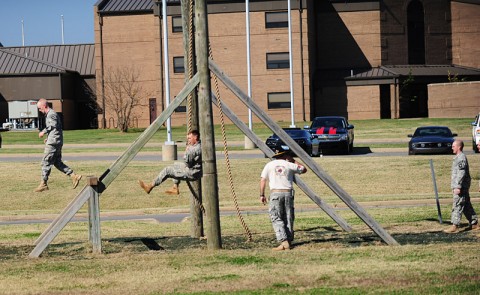 Trying to earn the coveted spurs of a Cavalry “Trooper”

Some of the tests evaluate leadership, technical and tactical proficiency, physical fitness, and the ability to operate as part of a team under high levels of stress and fatigue during both day and night conditions, though the specific tests vary by unit.

“The 15 lanes of the Spur Ride, the lanes are formatted like the lanes of a EIB site,” said 1st Sgt. James Nichols, the first sergeant of Troop B, 1st Sqdn., 61st Cav. Rgt., 4th BCT, 101st Abn. Div., “When the horse and Soldier become technically and tactically proficient together, the trooper receives their spurs.”

Some of the 15 lanes included first aid and 9 line MEDVAC tasks, sling load testing and aircraft orientation, react to contact, to name a few.

During the Spur Ride, candidates are also often required to recite from memory the traditional cavalry poem, “Fiddler’s Green”, or other traditions or historical information pertaining to the cavalry.

The poem by Edmund Clarence Stedman is one of the numerous poems about the cavalry that helps to show how steep the feelings for the history and tradition are in the cavalry.

Our good steeds sniff the evening air,
Our pulses with their purpose tingle;
The foeman’s fires are twinkling there;
He leaps to hear our sabres jingle!
Halt!

Each carbine sends its whizzing ball;
Now, cling! clang! forward all,
Into the fight! 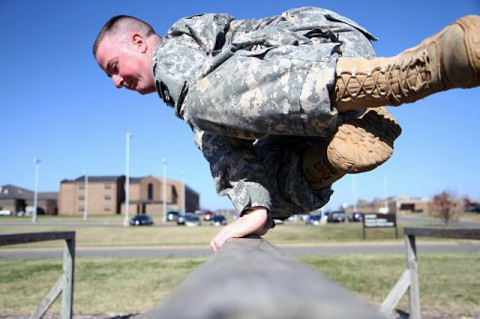 “We exchanged horses for tanks and helicopters but are still keeping to the old traditions,” said Edington. “We still are taking new troopers and training them to be proficient in their equipment of today.”

Of the 119 Soldiers who started the Spur Ride, a 104 qualified to earn their spurs and the privilege to be called a spur holder.

“Having proved worthy of the coveted spurs,” said Sutton, “They will keep us tied to the traditions and heritage of the past.”