Clarksville, TN – Austin Peay women’s basketball team begins the 2012 campaign with a matinee performance – a noon, Friday contest against UAB at Bartow Arena. The Lady Govs are 15-21 all time in season openers, including a 2-4 record under head coach Carrie Daniels.

APSU and UAB will meet for the fourth consecutive season, with UAB winning the previous three meetings. 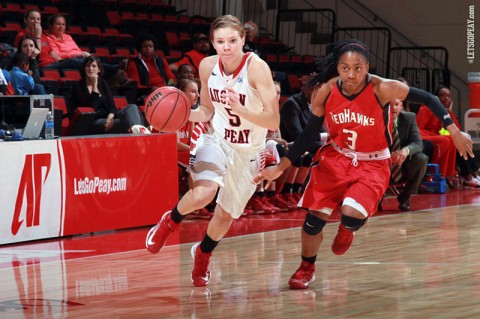 Austin Peay defeated Martin Methodist, 101-67, in its lone exhibition contest, Monday. APSU opened the second half with a 18-2 run over the opening 4:22 to break the game open. Six Lady Govs players scored 10 or more points. Junior guard Nicole Olszewski led the effort with 19 points and eight assists. Freshman forward Jennifer Nwokocha added 18 points and 11 rebounds, making 7-of-9 from the field.

Austin Peay made 56 percent (42-of-75) of its field goals, but struggled at the free-throw line where it converted just 57.1 percent (12-of-21) of its tries. The Lady Govs scored 25 points on fast-break opportunities and posted 57 points in the paint.

Senior gaurd Amber Jones, a 2011-12 All-CUSA pick, scored 17 points against Brewton-Parker and added 11 points against UAH. Junior forward Karisma Chapman was a preseason All-C-USA selection but played only in the UAH exhibition game, and filled the stat sheet with 17 points, eight rebounds, five steals and three assists. The Blazers were picked to finish third in Conference USA behind Tulane and UTEP.

An Austin Peay Win Would Mean

Be its second-straight season-opening win (defeated Southern Illinois in 2011 opener) and improve it to 16-21 in season openers. Be its second-straight non-conference win and non-conference road victory (won at Belmont in 2011). End a three-game losing streak to UAB with its first victory since 2004. Improve Daniels’ record to 73-117 overall, including a 3-4 record in season openers. Make the Lady Govs 426-589 overall since 1976-77.

An Austin Peay Loss Would Mean