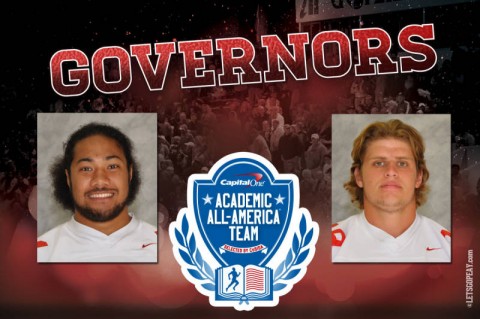 This is the second straight year Siliva has earned such distinction while it is the first honor for Stansfield. District 3 is comprised of all Division I schools in Tennessee, North Carolina and Virginia. The duo will now have their names placed into consideration for Academic All-America honors.

A psychology major, Stansfield has yet to make anything but an A in his first four Austin Peay semesters. He has been a member of the President’s List (4.0 GPA) all four semesters and has earned the Ohio Valley Conference Academic Achievement Award-having the highest GPA for the year in a conference-sponsored sport-in each of his first two college years.

In addition, he twice has been named to the OVC Commissioner’s Honor Roll (3.25 GPA/year) and has been a member of the Athletics Director’s Honor Roll (3.0 GPA) each semester. He was named the APSU Football Scholar-Athlete last year.

Stansfield is a member of APSU Honors College as well as Gamma Beta Honor Society. He also is involved in both the Student-Athlete Advisory Committee (SAAC) as well as the Fellowship of Christian Athletes.

On the field, the Franklin native moved into the starting lineup this season after being a part-time starter/reserve his first two seasons. He is part of an offensive line that again is ranked om the Top 15 nationally for fewest sacks allowed.

Siliva, meanwhile, owns a 3.9 grade-point average as an Agriculture-Sustainable Development major. He is a two-time member of the President’s List along with two other semesters on the Dean’s List (3.5 GPA). He also is a two-time member of the OVC Commissioner’s Honor Roll and a four-time Athletics Director’s Honor Roll member. A near non-qualifier when he came to the United States from Vailoa, America Samoa, Siliva has been chosen as the Fox College Sports Student-Athlete of the Game when the Govs play host to Tennessee Tech, November 17th.

Siliva moved into the starting lineup a year at defensive end. After playing much of the 2012 season inside, he was shifted back out to defensive end against Southeast Missouri.  He has 20 tackles on the season, including 4.5 for loss.

The CoSIDA Academic All-America and Academic All-District is organized and voted on by the College Sports Information Directors of America.