Khowst Province, Afghanistan – Some people search their entire life for signs telling them what to do. For Erika Espeseth, it was a billboard for military chaplaincy that pointed her in the direction she had been searching for.

She finally knew what she wanted in life: a life of ministry and service.

In January 2010, she would agree to enlist as a chaplain’s assistant half-way through her senior year of high school, something she never thought possible.

“I never considered military service,” said Espeseth, now deployed to Afghanistan as an Army specialist working as a chaplain’s assistant with the 3rd Special Troops Battalion, 3rd Brigade Combat Team “Rakkasans,” 101st Airborne Division (Air Assault). “I always put [it] on a pedestal. I always thought soldiers were amazing and I could never do what they do. I always thought: I’m little, I’m a female and I’m girly.”

However, she found she could relate to her recruiter.

“My recruiter was a female and she was small like me,” said Espeseth. “I saw her and thought it wasn’t that big of a stretch for me to be able to do this.”

Initially, the billboard attracted Espeseth to become a chaplain. But once she began talking with her recruiter, she found that she wasn’t qualified to become one.

“I didn’t have a masters in divinity,” said Espeseth. “You need a lot of different credentials to become a chaplain.” 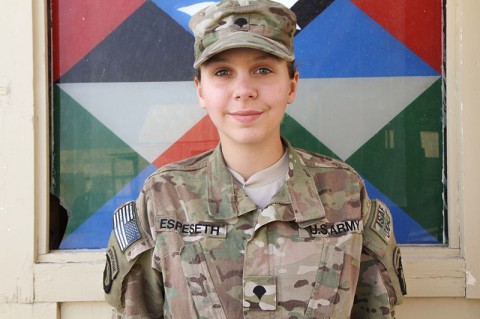 Refusing to be denied her calling, she asked about exploring other options within military ministry.

“My recruiter then told me about this thing called chaplain’s assistant,” said Espeseth. “We looked into it and I immediately fell in love with it.”

While sporting a 3.95 GPA and an ACT of 31, Espeseth nearly aced her military entrance exam with a score of 93. Her score caught the eyes of the personnel at the military entry processing stations.

“They tried to convince me to go into intelligence,” said Espeseth. “I was told I could do something better. I told them, ‘there is nothing better than being able to help Soldiers in the way that I can in ministry.'”

Long before these conversations with her recruiter, Espeseth had a love for the military and those who served in it.

During her junior year of high school she volunteered for a program called Soldier’s Angels, which pairs soldiers with a caring civilian in order to help boost morale through communication.

“It was a great way to get to know Soldiers and help them out,” said Espeseth. “I would be given a name of a Soldier, I would write to them asking what they are in need of. Then I’d send them gum, jerky, baby wipes and even homemade crocheted hats.”

The program enabled her to say thanks, and she didn’t take that opportunity lightly. 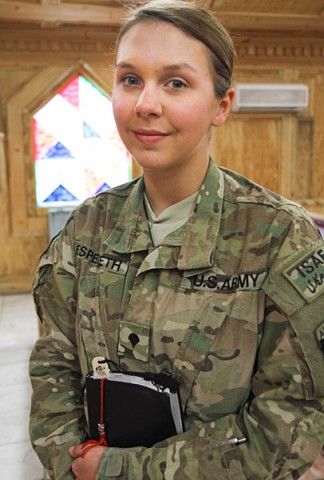 “I wanted to do something for people who did so much for me,” said Espeseth. “I thought about the people who needed me. I felt Soldiers do so much for our nation, they defend us, I didn’t want them to feel forgotten.”

Uniquely, she carries her patriotism pridefully while combining it with her passion for God.

“I believe there are two types of people who have given their life for me,” said Espeseth.”That is Jesus Christ and the American soldier.”

Standing amongst those soldiers she admired and helped for so long, she is not only standing with them but she is standing out.

Recently, Espeseth earned high praise and honors by becoming the top chaplain’s assistant of more than 75 other Soldiers within Regional Command –East, Afghanistan. Her command has also recommended she go before the promotion board to become a sergeant soon.

It isn’t just her professional appearance, military tact and mannerisms that makes her distinguished. Espeseth carries a large amount of enthusiasm and energy with her around the battle space and Soldiers gravitate to her and the chaplain because of it.

“Soldiers really need the morale boost,” said Espeseth. “They look forward to seeing us and get excited when the chaplain and I come around. Their faces really light up.”

Being a part of a battalion that has soldiers with more than 50 military occupational specialties, for Espeseth there is no shortage of soldiers to see, places to go or things to experience.

“I love battalion work, it is the best,” said Espeseth. “I get to do battlefield circulations and go out to see the Soldiers and provide them with ministry, assistance or just a good laugh. Wherever they are in the 3rd STB we get to be on the ground with the Soldiers. I truly love it.”

In addition to providing ministry support as a member of a religious support team, Espeseth is working on a special project that she is anxious to see finalized.

On June 1st, 2012, Forward Operating Base Salerno was attacked by a vehicle borne improvised explosive device. During the attack, the chapel was damaged on its eastern side. All the stained plexiglass was completely blown out and since replaced with plywood.

Since her brigade’s arrival at FOB Salerno, the ministry teams have decided to repair all of the chapel’s eastern windows with new stained plexiglass. 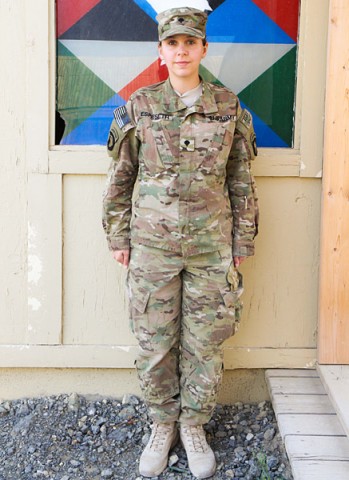 “We decided we wanted to make the chapel beautiful for people to worship in,” said Espeseth.

Espeseth was appointed the duty of designing three different sketches of stained glass for the head chaplain to choose from. Her duty doesn’t stop there, however.

“I did art metal and glass in high school, so I will get to actually make the stained plexiglass windows for the chapel,” said Espeseth. “I’m well versed in it. I get to use the skills I got in high school in an art class that most people would think is just fun and you never get to use them.”

Even though Espeseth is giving the Army and its Soldiers everything she can, she plans on pursuing her next challenge once she returns from Afghanistan in the spring.

“I’ll leave the Army 90 days after we get back to Fort Campbell, KY,” said Espeseth. “I’m planning on going to college and getting a degree in American sign language and then my masters in divinity. I want to become a chaplain.”

Although she’s leaving the Army in the near future, don’t count her out.

“I really love the military,” said Espeseth. “I love our service members and what they do for our country. I love the Army and I’ll definitely try to come back.”

Indeed she is keeping the Army in her thoughts and plans, but states the need for chaplaincy everywhere.

“Chaplaincy is in hospitals and so many other things,” said Espeseth. “The experience I’ve gotten; to know what a chaplain does, to see how much of an effect it has on a group of people, has really helped me solidify what I want to do. Being a chaplain is something that will enable me to really have an impact on a lot of people in so many different ways.”

While looking ahead to her future she is grateful for her present.

“I’ve learned so much compassion in the Army,” said Espeseth. “I’ve gotten to know so many different people from many different places in the world while having the best experiences. I would definitely recommend military service to anyone.”