Brentwood, TN – For the first time in a decade the Ohio Valley Conference Men’s Basketball Freshman of the Week honor has gone to the same person for four straight weeks.

That player is Austin Peay State University 6-8 center Chris Horton, who averaged 14.5 points while shooting 82 percent from the floor this week in helping the Governors gain a split. 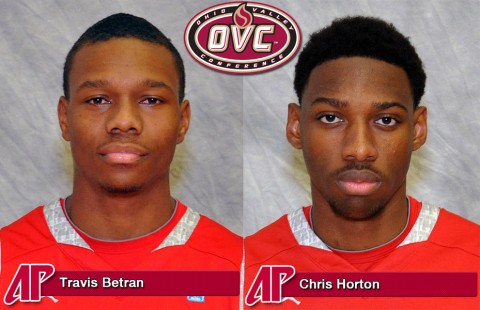 Meanwhile, junior guard Travis Betran, who scored 27 points in APSU’s loss to Memphis, Saturday, has been named the OVC Newcomer of the Week for a third time.

Those selections were named Monday.

Horton became the first OVC freshman to receive the award four straight weeks since Eastern Kentucky’s Matt Witt captured five straight times in the 2002-03 season. He recorded his career 20-point outing against Oakland City, going 10-of-12 from the floor. He also had a season-high 11 rebounds to record his season’s second double-double and also blocked a season-best five shots in the contest.

Against Memphis, the Decatur, GA, native got into early foul trouble but still finished with a team-best seven rebounds to go with eight points in just 22 minutes. For the week, Horton connected on 14 of 17 field goals (82 percent).

Betran was spectacular against Memphis. He scored 27 points, going 9-of-15 (60 percent) from the floor. He knocked down five of APSU’s six three pointers. By going five-of-six from three-point range, Betran now has made at least three three-pointers in the last six games.