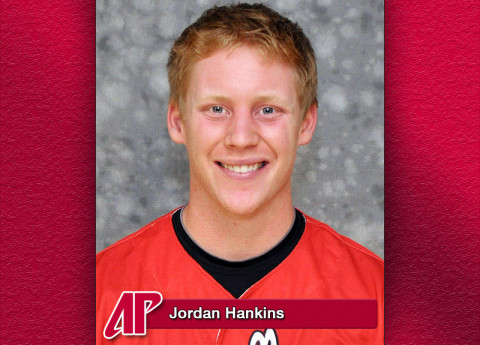 The honor follows a busy and successful sophomore campaign for Hankins. He played in all 64 games for the Govs last season and was second on the team in average (.336), home runs (10) and runs batted in (66). More impressively, he recorded only 16 strikeouts in 250 at-bats, a ratio of one strikeout every 15.6 at-bats that ranked 16th among Division I players.

Hankins was a first-team All-OVC selection, an OVC All-Tournament pick and earned All-Region honors at the NCAA Tournament’s Eugene Regional. He also was a second-team All-South Region pick by the American Baseball Coaches Association.

Capping his sophomore campaign, Hankins was selected to play with USA Baseball’s National Collegiate Team and traveled with that team for a series in Cuba and a tournament in The Netherlands.

Hankins and the Govs open their 2013 campaign with a Friday, February 15th contest against Iowa that is the first of a three-game series against the Big 10 foe.