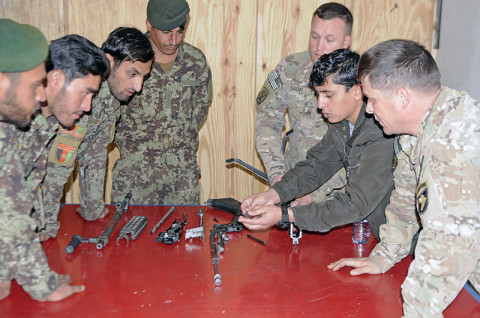 The training consisted of instruction on “disassembly, assembly, general function, loading, clearing, modified for the ANA to give them a better understanding of all the weapons,” said Sgt. Jason Sabin, a member of SFAAT 6.

Sabin also said they instruct the ANA in other areas such as map reading, mortars, preventive maintenance checks and services for their vehicles and other maintenance activities.

Staff Sgt. Kevin Canada, the noncommissioned officer in charge of SFAAT 6, said that during the previous week the team had facilitated land navigation training and followed by machine gun training this week.  In the next week, the team plans to conduct mortar and forward observer training before beginning the cycle all over again.

“The overall goal that we’re looking for with the machine gun training, and all the other courses that are going on, is we want to develop a program so that we’re able to, by the time we leave here, teach their senior NCOs the step-by-step (process) so that they’re able to impart that information onto their lower guys and keep the cycle going,” Canada said.

“Basically, we’re trying to make sure we can share our knowledge with them, and they can have the same kind of understanding when they train their soldiers so that they can be just as effective,” said Sabin. 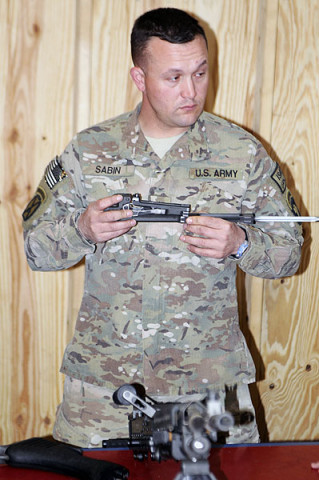 Sabin explained that teaching the Afghan non commissioned officers the ability to train their own soldiers will give their counterparts the ability to strengthen the NCO channels within the ANA ranks.

“Basically, we’re trying to make sure we can share our knowledge with them, and they can have the same kind of understanding when they train their soldiers so that they can be just as effective,” said Sabin.

Sabin explained that teaching the Afghan non commissioned officers the ability to train their own soldiers will give their counterparts the ability to strengthen the NCO channels within the ANA ranks.

The instructors first demonstrated the disassembly, reassembly and functions check of each weapon, followed by each ANA soldier going through and completing the tasks themselves.

Sabin complimented the ANA on how quickly they picked up on the class, saying that every soldier was a first-time “go” on each process of the weapon systems. It was the first time each of them had handled the weapons.

The instructors had to use an interpreter to help teach their ANA counterparts the different steps and parts of each weapon, but found that it was easier to do than they thought it would be.

“It’s really not that difficult,” said Sabin. “It’s just a matter of putting (everything) in terms everyone understands.  The hard part is that some of our words don’t translate easily, so you have to come up with a different way to describe what you’re trying to say.

“And we have really good translators,” added Sabin. “Some of these translators have been doing this for a while with other units so they’re pretty good about it.”

“I feel the training was good today,” said Canada. “Whenever we started getting them going on stuff, we’ll go through it. As soon as some of their NCOs start picking it up, the guys that are in the class, they’ll start jumping in and correcting dudes that are making mistakes, which is good because that’s what we’re looking for is for them to be teaching their own.”

Canada stated that not only do they give classes to the ANA, but they go out on missions with them, as well.

Sabin said that the majority of the ANA Soldiers they were training were from the heavy weapons platoon.

“Most of them were around the rank of E5. [We are] trying to train the trainers basically. We’re basically instructing them so they can take it back and disseminate it.”

Canada said he’s looking forward to the day when they are no longer giving classes but watching as their counterparts begin teaching the classes themselves.

“I want to, if we can get enough of them trained well enough in the next three, four, five months, just to completely hand it over to them,” Canada said. “Then we can sit in and watch them teach the class. And if there’s anything that needs to get addressed, we can address it with that instructor afterwards.”