Cape Girardeau, MO – Austin Peay State University women’s basketball team could not overcome a lack of intensity on the defensive end and dropped its Ohio Valley Conference opener, 71-57, to Southeast Missouri, Saturday at the Show Me Center.

Austin Peay (5-8, 0-1 OVC) again suffered through a slow start, making two field goals in the first three minutes before going without a basket over the next five minutes. Southeast Missouri used an 10-0 run during that drought to build a 13-4 lead with 13:20 left.

The game was a see-saw affair the half’s remainder with Austin Peay getting within a basket or tying the game, but unable to gain the lead. Southeast Missouri saw its lead erased twice but closed the half with a 7-2 run to take a 10-point, 37-27 lead into halftime.

Southeast Missouri (6-8, 1-1 OVC) fended off the Lady Govs charge and built the lead back to 10 points by the 12-minute mark. The Redhawks lead expanded to 18 points with 3:10 left and they would not be threatened the game’s remainder. 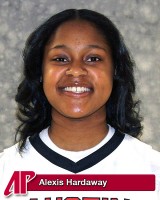 Senior Leslie Martinez finished with career-high tying 14 rebounds. The Lady Govs offense was held to 37.3 percent (22-of-59) shooting on the night.

Southeast Missouri Jordan Hunter led all scorers with 21 points and Brittany Harriel added 19 points – both topping the previous season high by a SEMO individual. The Redhawks posted a season-best 47.4 percent (27-of-57) shooting percentage which included a 38.9 percent (7-of-18) outing from three-point range.

Austin Peay returns to action when it travels to UT Martin for a 5:30pm, Monday contest at the Elam Center.