“This was a big meet, featuring lots of top competition,” said head coach Doug Molnar [1]. “We’re definitely still improving, but I’m very pleased with how well this meet went for us.” 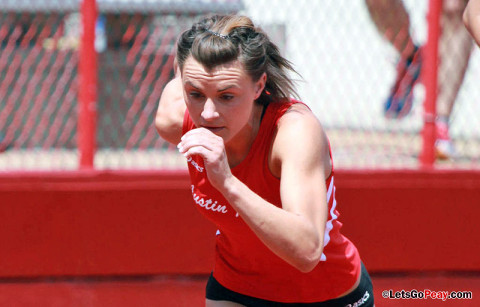 Senior Chantelle Grey [2] turned in the top finish by an Austin Peay athlete. She finished runner-up in the 800m run thanks to a 2:15.37 mark, losing out by fragments of a second to UAB’s Rachel Harley.

The Lady Govs started the day off with a strong performance from freshman Breigh Jones [3]. The Memphis native finished 10th overall in a 73-athlete field in the 400m dash, winning the eighth heat with a personal-best 58.28 mark. She’s already lowered her career-best by more than a second since joining the Lady Govs in December.

Jones, Ross, Grey and junior Taelor Slaughter [5] teamed up to place sixth overall in the 4x400m relay. Their 3:54.09 mark puts them far ahead of last season’s indoor pace; the only meet in which Austin Peay’s relay team finished with a better time during the 2011-12 season was the OVC Indoor Championships.

“The relay is a great indicator of how far we’ve come this year,” Molnar said. “We’re running much better, much earlier in the season this year. Our two freshmen both ran well, both in the relay and in the 400-meter.”

One of the toughest defeats of the day went to senior Lauren Lyles. She finished 17th in the 60m hurdles with a personal-best 9.00 run, but missed out on qualifying for the finals by eight-thousandths of a second.

In her first action since cross country season, junior Xiamar Richards [7] shook off the rust and turned in a solid ninth-place finish in the 3000m run. The Clarksville native finished with a 10:40.06 mark.

The Lady Govs will be back in action next weekend, when they head east to the ETSU Invitational in Johnson City, TN. The two-day event begins January 18th.