Clarksville, TN – Sean Whalen might not have a household name, but chances are you’ll recognize his face. Since 1990, the popular character actor has appeared in more than 90 films and television shows, ranging from “Men in Black” and “That Thing You Do” to “Scrubs” and “Cold Case.”

The same can be said for actor Christopher Darga. You probably know him best as a viking from the Capital One Visa commercials, but he’s also appeared in the TV series “Dexter” and the 2003 Jim Carey movie “Bruce Almighty.” 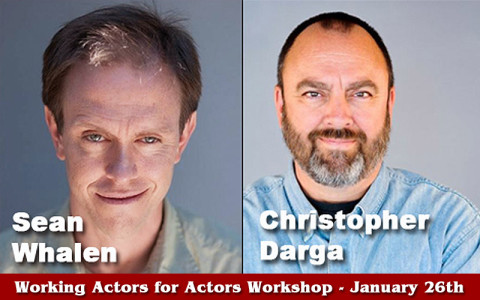 On January 26th, these two familiar faces will stop by the Austin Peay State University Trahern Theater for a program titled “Working Actors for Actors Workshop.” The workshop, sponsored by the APSU Area of Theatre and Dance, will feature the two men explaining “the truth about what it takes to maintain a career in Hollywood.”

Both Whalen and Darga have worked steadily in the highly competitive film and television industry for more than 20 years. Whalen broke into the business in 1990 when he appeared as a fast-food manager on the short-lived “Ferris Bueller” television show. Darga’s big break came in 1987 when he was cast as Det. Ray Zacchino for an episode of “L.A. Law.”

The two actors will first meet privately with students at 9:00am on January 26th. At 2:00pm that afternoon, they will offer a second free workshop that is open to the entire APSU and Clarksville community.

For more information on this event, please contact the APSU Area of Theatre and Dance at 931.221.6767.