The one-day meet begins 5:00pm, Friday, at the French Fieldhouse. 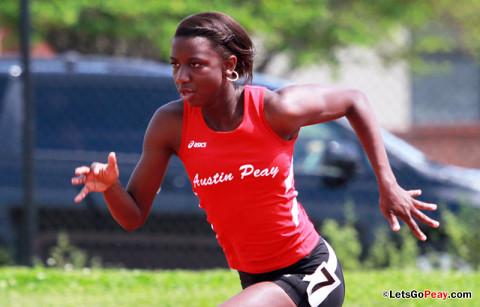 The majority of the Lady Govs got last weekend off in preparation for this final meet before the Ohio Valley Conference Indoor Championships, next weekend.  Senior Chantelle Grey, the only active Lady Gov last weekend, finished 11th in the 800m run at the Spire Invitational to take over first place in the OVC in that event.

“I think the week off really helped a lot of our athletes who were banged up,” said head coach Doug Molnar. “Hopefully this meet will be a good confidence-builder for us in the run up to the OVC Championships.”

Grey and junior Xiamar Richards (third in the OVC in the 5000m run) lead a strong contingent of Lady Govs seeking a good qualifying position for the conference championships.  In sprints, sophomore Erika Adams ranks eighth in the conference in the 60m dash but is less than a tenth of a second out of fourth place.

Both Austin Peay relay squads reside at the top of the conference rankings.  The 4x400m relay team ranks fourth, just over two seconds behind third-place SIU Edwardsville, while the distance medley team ranks second, more than one second ahead of Eastern Illinois.

In the field,  senior Nicole Bressner sits an inch-and-a-half out of eighth in the conference in the pole vault with a season-best 10′ 11.75″ mark.  Seniors Cenitra Hudson (sixth) and Lauren Lyles (seventh) rank near the top in the long jump, with Hudson also ranking seventh in the triple jump.

“This meet will be big for us,” Molnar said. “While it’s a little more low-key than Grey’s field at the Spire Invitational was last week, everybody here is trying to get a better time or mark for their conference championship runs. It’s going to be a tough field.”