Clarksville, TN – With low 40 degree temperatures expected to greet it, Austin Peay State University men’s golf team will open the 2013 “Spring” schedule when it plays host to Dayton, 9:00am, Friday, in a dual scrimmage at the Links at Novadell. 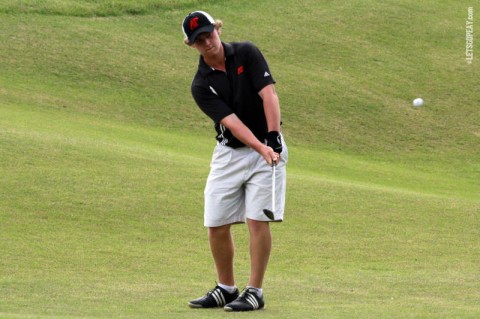 Both teams will play each individual—APSU will have all 10 players competing while Dayton will play 12. Team scores nor the individual results will affect rankings.

Since returning from Christmas break and practice beginning, the Golf Govs, battling the weather, have been able to get outside for nearly 60 percent of their practices. But the Govs are set to battle a Dayton team that already has played in one spring tournament at Wexford Plantation in Hilton Head, SC. The Flyers did so without getting any real practice time because of the severe weather conditions in Ohio this winter. They finished 17th out of 18 teams.

“The guys are looking forward to competing against another team,” APSU coach Kirk Kayden said. “We have played and competed against each other for the last six weeks. It will be nice to see another team.”

Reigning Ohio Valley Conference champion Anthony Bradley, a junior, will play No. 1 for the Govs while All-OVC selection, Dustin Korte, the team’s only senior, will be at No. 2 followed by the third member of the team’s “Big Three,” junior Marco Iten.

The Govs hope to be bolstered by Tucker Wallace’s recent return to form. A member of the OVC’s All-Newcomer team as a freshman a year ago, Wallace struggled during the fall, competing only in the F&M Bank APSU Intercollegiate.

The fifth spot will belong to redshirt freshman Corey Smith, who was a model of consistency in the fall after working his way into the starting lineup.

Freshman Chris Baker will be at the No. 6 position after a solid fall followed by junior Trey Tarpley, freshman Austin Kramer, junior Alasdair MacLennan and redshirt freshman Cleve Guinn.

“The guys have been working hard on the days we have been out,” Kayden said. “It will be a good tune-up for our upcoming event in Florida.”

The Govs, in fact, will leave Saturday morning for Orlando, FL, to play in the Harmony Preserve Intercollegiate in Melbourne, FL, beginning Monday.