“Trooper Hall is a great example of what is expected of a Tennessee State Trooper. He’s professional, courageous, works hard and has a positive attitude. His actions on the night of December 16th, 2012 were nothing short of heroic. Trooper Hall is an outstanding representative of our agency and deserves the Trooper of the Year recognition,” Colonel Tracy Trott said. 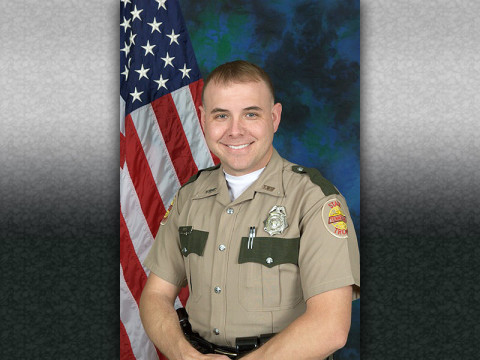 Trooper Nathan W. Hall earned the Trooper of the Year honor after responding to an alleged suicide attempt by a 15-year old female in Sullivan County on December 16th, 2012. Trooper Hall responded to Interstate 26 near the Meadowview Convention Center following a request for assistance from the Kingsport Police Department.

After searching the area for nearly one hour, Trooper Hall located the juvenile on a rock cliff approximately 60 – 70 feet high. Trooper Hall scaled the cliff, while talking to the young female in attempt to keep her calm. Once he reached the juvenile, he handcuffed himself to her for her safety. With the help of the Kingsport Fire Department’s truck ladder, Trooper Hall then escorted the juvenile down to safety. Trooper Hall’s quick and decisive actions led to a safe conclusion.

“Each award recipient has shown their dedication to public service and to the safety and security of the state of Tennessee by their extraordinary accomplishments,” Safety and Homeland Security Commissioner Bill Gibbons said. “It’s an honor to recognize them for their service tonight and to honor their sacrifice year-round.”

Trooper Eric Miller received the THP Knoxville District’s Trooper of the Year honors. His responsibilities as a road trooper in Loudon County include serving as a member of the district’s Strike Team and Honor Guard, as well as the Executive Security Detail. He also handles security for the University of Tennessee Football Coach and security assignments for both home and away games.  Due to his work as a Field Training Officer, he has been asked to assist the THP Training Center with the upcoming trooper cadet class. In 2012, Trooper Miller had made 54 DUI arrests and 64 physical arrests, conducted 64 commercial vehicle inspections, and issued 638 citations.

Trooper Charles “Tommy” Lyles earned Trooper of the Year honors for the THP Chattanooga District after leading the district in DUI enforcement. He has arrested 95 individuals on suspicion of driving under the influence and made 106 other arrests.

Trooper Lyles, who is stationed in Franklin County, has issued 1,028 citations and conducted 69 commercial vehicle inspections.  He is a five-year veteran of the THP, during which time he has earned the respect and admiration of his peers and supervisors. Trooper Lyles has a tremendous work ethic and is a valuable asset to the THP.

The Nashville District presented Co-Trooper of the Year awards to Trooper Vincent Turocy and Trooper John Grinder. Trooper Turocy has set an agency record with 227 DUI arrests for 2012. The 14-year veteran also issued 1,674 total traffic citations for the year, the second highest in the district.

Trooper Turocy’s work-ethic is unmatched. He has consistently led the district in both DUI arrests and overall traffic enforcement. Trooper Grinder joined the THP in 2005 and is currently assigned to Robertson County. Trooper Grinder is runner-up in DUI arrests across the state with 134 cases. His DUI arrest totals are especially impressive because he works in a rural county with approximately 50,000 licensed drivers. He also has 349 commercial vehicle inspections, with an overall out of service rate of 29 percent.

Additionally, his persistent investigative skills in a recent fatal crash case led to a vehicular homicide indictment, when the crash was initially deemed non-criminal by other investigators. Together, Trooper Turocy and Trooper Grinder have saved countless lives due to their combined DUI arrests and are deserving of this recognition.

Sergeant Jamie Jarrett of the Memphis District received that district’s Trooper of the Year nod.   On August 30th, 2012, the Memphis Police Department advised THP dispatch to issue a “be on the lookout” for a Chevrolet SUV traveling eastbound on Interstate 40. The driver of the vehicle was wanted in connection with an alleged homicide that occurred earlier that day.

Sgt. Jarrett was near the Haywood Scales Complex, where he is assigned, when he observed the suspect vehicle. Sgt. Jarrett had dispatch run the vehicle registration and confirmed it was the suspect wanted by MPD. He then requested backup before activating his emergency equipment to initiate a traffic stop. The suspect failed to stop and a pursuit ensued, continuing across the division line into the Jackson District.

A Jackson Trooper deployed spike strips and the suspect crashed at the 76 mile marker with no other vehicles involved. The suspect was apprehended and later released to the Memphis Police Department. Sgt. Jarrett’s actions kept citizens from harm, as he utilized the training he has received over his 12-year career as a State Trooper.

Trooper Dewaine Jennings was named Trooper of the Year in the THP’s Cookeville District after looking beyond the ticket on a traffic stop made on August 25th, 2012. Trooper Jennings stopped a vehicle for speeding and upon contact with the two occupants noticed suspicious behavior. He then ran a validation check on the 19-year driver and discovered he had an outstanding warrant for statutory rape.

It was later revealed that 13-year old female had been raped by an older adult and the mother had been advised to keep her away from older men. The boyfriend admitted to a sexual relationship with the female juvenile, and her mother admitted to being aware of the relationship.

Both the 19-year old male and the juvenile’s mother were arrested. Trooper Jennings thorough investigation in this case resulted in the discovery of a crime. Additionally, his trooper activity ranks second in the district with 23 DUI arrests and second in total citations with 837.

The Lawrenceburg District Trooper of the Year was awarded to Trooper Jon Judge. On August 20th, 2012, Trooper Judge stopped a vehicle on US Route 431 in Marshall County for speeding. The male driver did not have a driver’s license in his possession and gave conflicting information.

Upon further investigation and several failed attempts to verify the driver’s status, Trooper Judge attempted to arrest the driver for no driver’s license. The suspect then fled on foot towards his own vehicle, but Trooper Judge thwarted his attempt to flee. Trooper Judge gave verbal commands, however, the suspect failed to comply and charged Trooper Judge.

It was later revealed that the suspect was wanted in Indiana on escape warrants and in Alabama on robbery charges. He also had a lengthy criminal history out of six different states.  Trooper Judge’s actions reflect his dedication of duty and service to the state of Tennessee.

Trooper Jason Kirk earned the Trooper of the Year award for the THP Jackson District. After graduating from the Trooper Cadet School in March of 2011, Trooper Kirk has served as a road trooper in Hardin County.

During 2012, he had 12 drug-related cases and led the district in all four quarters in DUI arrests (68). Trooper Kirk investigated 116 crashes during the year and made 104 other arrests. Additionally, he completed 69 commercial vehicle inspections and issued 1,570 citations. He has shown consistent activity to reduce crime and make roadways safe in Tennessee.  Trooper Kirk is also a member of the District 8 Strike Team.

Investigative Trooper of the Year

The THP’s Investigative Trooper of the Year was awarded to Trooper Jeffrey Boyd. Trooper Boyd recovered significant amounts of illegal drug proceeds from two investigations. The first was on several warrants served by Trooper Boyd in April 2012 in the Lawrenceburg District.

Trooper Jeffrey Buchanan was named Trooper of the Year for the THP’s Administrative District (9). On November 2, 2012, THP Special Operations/Aviation Unit were requested to help a stranded hiker on the Appalachian Trail in the Great Smokey Mountains. The hiker had suddenly encountered four to five foot snow drifts due to Hurricane Sandy traveling inland and was unable to continue the journey.

Park Rangers had attempted to locate the hiker, however, chest deep snow and the hiker’s location enabled them from proceeding with the search. The THP Huey helicopter launched into action and after almost an hour of searching, spotted tracks in the snow and followed them for approximately a mile and a half before observing the hiker’s camp.

Trooper Buchanan was lowered to the ground, where the snow was chest deep. He then made his way to the hiker, evaluated his condition, outfitted him with a harness, and gave the signal for him to be hoisted from the ground. Trooper Buchanan remained on the ground to collect the hiker’s gear and supplies, before being raised to safety. It was determined the hiker would not have survived another night in the harsh weather conditions. Trooper Buchanan’s commitment during the rescue mission likely saved the hiker’s life.

Interdiction Trooper of the Year

Sergeant Wayne Dunkleman earned the Interdiction Trooper of the Year honors after his own success and leadership of the THP West Bureau Interdiction Plus Team. Sgt. Dunkleman made 15 felony arrests, eight DUI arrests and assisted in seizing more than 330 pounds of marijuana in 2012. He also conducted 76 motor vehicle inspections during the year.

Most notably, Sgt. Dunkleman made a drug arrest that was adopted by the U.S. Drug Enforcement Administration (DEA). This case involved a narcotics trafficking ring covering three states, including Tennessee, Texas and Alabama. It led to the arrest of seven individuals and the seizure of illegal drug proceeds. Sgt. Dunkleman leads by example and always goes the extra mile to make the Interdiction Plus program a success.