The win by Austin Peay (10-2) ended a six-game losing streak to Western Kentucky, with the last Governors win coming on April 14th, 2009.

Trailing 6-5 since the top of the fourth inning, Austin Peay lead-off hitter Rolando Gautier opened the inning with flair over the shortstop’s head for a single to get things going.

After Western Kentucky (4-6) got the first out of the inning on a strikeout, Jordan Hankins hit an opposite-field double into left driving in Gautier all the way around from first base with the tying run to make it 6-6.

That would bring up Craig Massoni, who hit a seeing-eye single through the right side of the Hilltoppers infield to score Hankins to put the Govs up 7-6.

Massoni, along with Cody Hudson, finished the game with two hits each.

That would be all the runs that Austin Peay would need, as Kacy Kemmer – who entered the game in relief in the fifth inning – and closer Tyler Rogers made that lead hold up for the victory.

Kemmer (1-0), who pitched four scoreless innings in relief of Governors starter Jared Carkuff got the win, while Roger’s scoreless ninth inning earned him his sixth save of the season.

It didn’t take long for Austin Peay to get on the board to open the inning, as they scored three runs in the bottom of the first inning. 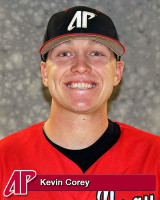 Kevin Corey got things started with a one-out single into short center field and moved to second base when Hankins followed with a base on balls.

That brought up Massoni, who lifted a deep fly ball to left field that was missed played by Western Kentucky’s outfielder Adam Lavelle for a RBI double.

Hudson would follow with an RBI single, to make it 2-0, with the final run of the inning coming in on a throwing error by Hilltopper pitcher Josh Bartley on a pick-off attempt at first base.

Western Kentucky would respond in the top of the second inning, scoring twice – including taking advantage of a balk.

Anderson Miller drew a one-out walk and moved to second base on a single an out later.

Both runners moved up on a balk came against Carkuff — his second of the game – with both coming in an a single to left field off the bat of Trevor Lowe to cut the Austin Peay lead back to 3-2.

The Hilltoppers continued to put the pressure on Carkuff in the top of the third, loading the bases with just one out, but the freshman limited the damage allowing Western Kentucky to only score one run – on a groundout – to tie the game 3-3.

Austin Peay retook the lead in the bottom of the inning – on only one hit – as the Governors took advantage of a hit batsman and a walk to get thing going.

Gautier led off the inning by getting hit by a pitch and advanced to second when Corey drew a base on ball.

Both runners would advance on a double steal, and two outs later both would come in on a single to right center by Hudson to put the Govs back up 5-3.

The lead wouldn’t last long with the Hilltoppers getting the first three runners on to start the fourth inning, including a three-run homer by Regan Flaherty just inside the right-field foul pole, to give Western Kentucky its first – and only — lead of the game, 6-5.

Austin Peay Governors Baseball is back in action Friday through Sunday, March 9th-11th at the 2013 Riverview Inn Classic here in Clarksville, TN. The Govs play Milwaukee at the 3:30pm game Friday. The other teams in the Tournament are Creighton and UALR who play in the 12:00pm game Friday.