Clarksville, TN – Clarksville Police have charged an adult and juvenile, for a series of purse thefts which occurred between October and December 2012.

The pair of thieves would watch for unsuspecting shoppers to leave their purse unattended, pick it up, and exit the store with the stolen purse. They would quickly utilize the victims’ credit cards before they could be cancelled, to purchase gift cards. 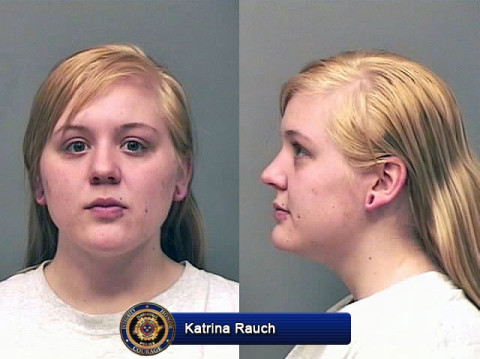 There was approximately $2,000 in gift cards purchased.

Police got a break in the case when Officer Jesse Scott spotted a Miata which was possibly linked to the thefts. He passed the information onto detectives who quickly developed Katrina Rauch, 19 and a 17 year old juvenile as suspects.

The case developed and, on March 6th, a search warrant was executed on the residence of Katrina Rauch at 252 Tobacco Road.

Stolen property and cash was found inside of the residence.

The nine victims had an estimated $5,500 stolen from them either through the credit card transactions or property taken from their purses.  Rauch and the juvenile would discard items from the purses which could not be easily converted to some sort of monetary value.

The juvenile was charged with Theft.

The investigation is ongoing and additional charges may be filed. The lead investigators are:  Detective Howard Gillespie and Jennifer Szczerbiak.