This is week 2 of the league race after 10 teams opened the campaign last weekend, including Eastern Illinois which lost a three game series to SIU Edwardsville. 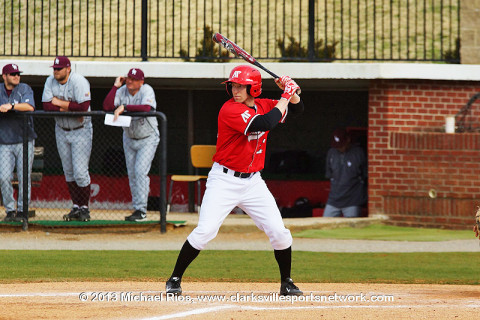 Austin Peay opened the league slate with a bye week and will play OVC foes the next 10 weekends. The Govs will seek to turn its fortunes in Charleston where it has not won a series since 2004, posting a 3-7 record in the four series since.

APSU is batting .322 during the streak and averaging 6.7 runs per game. Governor pitching is carrying a 4.36 ERA during the stretch, but it’s starters are only 1-0 with a 6.50 ERA.

Senior outfielder Cody Hudson was named National Player of the Week by two organizations this week and is batting .485 with 12 RBI and 7 stolen bases during his 8-game streak.

Junior third baseman Kevin Corey has driven his batting average up 217 points in the last 18 days, hitting .259 entering the weekend.

Shortstop Reed Harper recorded 8 of his 12 RBI during a six-game hit streak that ended Wednesday at Lipscomb.

Austin Peay has leaned on its bullpen during the current win streak with it responsible for 30.0 innings (out of 66) and it has responded with a 6-0 record and 1.80 ERA while holding opponents to a .176 batting average. Closer Tyler Rogers is 4-0 with 7 saves in 13 appearances this season, posting 4 wins and 2 saves during the win streak.

Junior starter Lee Ridenhour, the Govs No. 1 starter, is 2-0 this season with a 2.01 ERA and went 9 innings in a no decision last week against Milwaukee. Senior Casey Delgado will toe the rubber in Game 2, seeking to bounce back from a sub-par outing against Creighton last weekend where he lasted just 2-plus innings. Junior Zach Hall will start the series finale while looking to build on last weekend’s quality start (7.0 IP, 3 R, 6 K) against UALR.

The Govs continue to gather recognition for their hot start nationally. Austin Peay was listed among the teams receiving votes in the USA TODAY Sports Coaches poll released March 11th. The Govs tallied six points in the poll and were tied for 34th unofficially with Indiana and Texas.