Ristovski ran his win streak to 10, which coincided with the Govs 10-match win streak as a team, over the weekend. 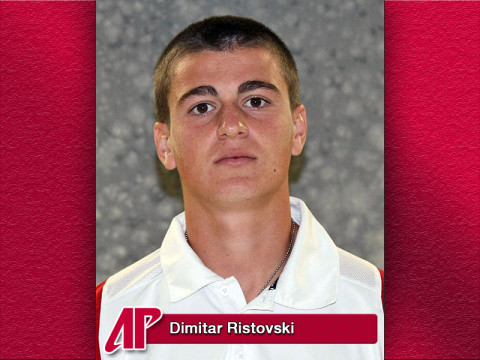 The Macedonian knocked off Eastern Illinois’ Robert Skolik, 6-3, 6-0, at No. 3 singles to reach double-digits in consecutive wins.

Friday, Ristovski easily dispatched SIU Edwardsville’s Jacob Perkins (6-4, 6-0) in singles before teaming with Iago Seffrin for an 8-3 victory at No. 2 doubles against Stephen Washuta and Jacob Tanulanond.

Ristovski is the second Gov to take home a weekly award in 2013. Senior Sean Bailey won the first weekly honor for March 13th.

Ristovski and the rest of the Govs return to action Tuesday, April 2nd, at Murray State before closing out the regular season with four consecutive home matches.