Nashville, TN – The Nashville Sounds connected for only five hits Sunday against the New Orleans Zephyrs, who leveled the opening series with the Sounds at two games apiece by defeating the home team, 3-1.

The Sounds plated their only run in the game’s final inning. Sounds left fielder Sean Halton led off in the frame with a double into the left-field corner, advanced to third on a groundout by Stephen Parker and scored on Cole Garner’s groundout to third. That was the extent of any Sounds rally.

Sounds second baseman Scooter Gennett extended his early-season hitting streak to four games with a leadoff single in his first at-bat on Sunday. Gennett leads the team with a .533 batting average through four games, and entered the day tied for fifth in the league at .545. He picked up his second hit in the eighth, for his third multi-hit game of 2013.

The Zephyrs got on the board first in the second inning on a two-out single up the middle from Wilson Valdez, scoring left fielder Matt Diaz, who doubled earlier in the frame. 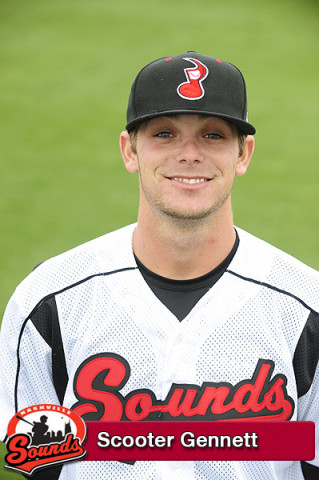 New Orleans tacked on two additional runs in the fourth inning; the first a solo home run off the left-field light pole by shortstop Nick Green, and the next on an infield groundout by pitcher Mitch Talbot, scoring Matt Diaz from third. On the play Sounds shortstop Blake Davis made a great infield dive to get the out and prevent any additional runs.

All three runs were charged to pitcher Zach Kroenke, who was charged with the loss in his Sounds debut. The southpaw allowed seven hits in three innings of work, with three strikeouts and no walks.

Donovan Hand pitched three innings of relief, increasing his innings streak without allowing an earned run to 4.2 in 2013. He entered in the third with two inherited runners from Kroenke, both in scoring position, and allowed only one to score. He finished the day with three strikeouts, no walks, and three hits. He also kept a runner from reaching third in his final frame on a 1-6 put-out.

Also getting work in the Sounds ‘pen was Kyle Heckathorn and Jesus Sanchez, who combined to allow only one hit in three scoreless innings.

Mitch Talbot gets the win for New Orleans, going five innings and allowing two hits. Reliever Chris Hatcher notched the save, his first. Offensively, Diaz and Koyie Hill led the team with three hits each.

The Sounds will host the Oklahoma City RedHawks for a four-game series at Greer Stadium, beginning Monday night at 7:05pm. Starting on the hill for the Sounds will be RHP Frankie De La Cruz against the RedHawks LHP Rudy Owens. Monday night is $1.00 Hot Dog Night at Greer.