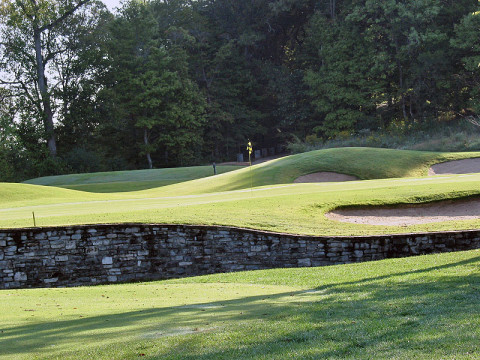 2013 OVC Golf Championships to be held at the GreyStone Golf Club in Dickson, Tennessee

Both the men’s and women’s fields will be the largest in OVC history with the addition of first-year member Belmont and inclusion of SIUE, who is eligible for postseason competition for the first time this season.

The OVC women’s golf title will be contested amongst the 10 women’s teams that sponsor the sport – Austin Peay, Belmont, Eastern Illinois, Eastern Kentucky, Jacksonville State, Morehead State, Murray State, SIUE, Tennessee State and Tennessee Tech. The student-athletes will begin with a practice round on Saturday before the opening round starts on Sunday at 8:00am.

The men’s golf championship will feature 11 teams – Austin Peay, Belmont, Eastern Illinois, Eastern Kentucky, Jacksonville State, Morehead State, Murray State, SIUE, Tennessee State, Tennessee Tech and UT Martin. The teams will have a practice round on Wednesday and tee off on Thursday morning at 8:00am.

This marks the fourth year in a row that GreyStone has hosted the OVC Men’s and Women’s Championships. Last year Jacksonville State swept the men’s and women’s championships.

Hole-by-hole live results from each day of the championship can be accessed through links at OVCSports.com.

A year ago Jacksonville State led from start to finish in winning its fifth OVC crown and first since the 2008 season. The Gamecocks had entered the final round with a five-shot lead and proceeded to card the ninth-best single round team score in OVC Championship history (300) to win going-away.

JSU’s Ornella Arrizon and Morehead State’s Marisa Kamelgarn shared medalist honors, marking the first time in OVC history that honor had been shared at the women’s championship; both finished at 222 (+6) and bested the field by two shots. Kamelgarn was also named OVC Golfer of the Year in a vote of league head coaches.

Both Arrizon and Kamelgarn return for their final OVC Championship this season and will look to become the first players since 2004-05 to repeat as medalists.

Individually Morehead State freshman Anna Appert Lund has the top scoring average in the OVC, averaging 75.6 shots per round. That is 0.4 strokes better than her teammate Kamelgarn and 0.5 strokes better than Murray State junior Delaney Howson (who was third at last year’s Championship) and Jacksonville State sophomore newcomer Maya Parsons (a three-time OVC Golfer of the Week award winner this year).

The individual medalist race was claimed by Austin Peay’s Anthony Bradley who carded a three-round score of 210 (-6) and led from start-to-finish. It was the sixth medalist honors by an APSU golfer and first since the 2003 season.

Austin Peay has claimed a school-record five tournament championships this season including three this spring (the team was second in the other two spring tournaments). The Governors have used a balanced attack that has seen four different players earn OVC Golfer of the Week honors a total of eight times this year. APSU has a league-best 292.8 scoring average. UT Martin has laid claim to three tournament titles this year while defending champion Jacksonville State and Murray State each have two regular season crowns this year.

Individually last year’s OVC Golfer of the Year Patrick Newcomb returns for his final Championship after finishing tied for second a season ago. Newcomb has the top scoring average in the league this season (71.4). SIUE sophomore Colin McCarty, who will be competing in his first OVC Championship, was named OVC Golfer of the Week this past week and has the second-best average in the OVC (71.8).

Jacksonville State sophomore Tomasz Anderson, last year’s OVC Freshman of the Year, has been named OVC Golfer of the Week six times this season and is tied for third in the league in stroke average (72.5) along with Tennessee State senior Cameron Scitern. The Austin Peay trio of Bradley (72.9), Marco Iten (73.0) and Dustin Korte (73.2) rank fifth, sixth and seventh in the OVC in stroke average respectively.