Clarksville, TN – Senior John Storie, of the Austin Peay State University men’s tennis team, has been named the Copies in a Flash APSU Athlete of the Week.

Storie was the story for the Govs at the OVC Tennis Championships. The Johnson City, Tennessee, native won both his singles matches and both doubles matches with Aleksas Tverijonas to help Austin Peay clinch its first OVC Tennis title since 1974. 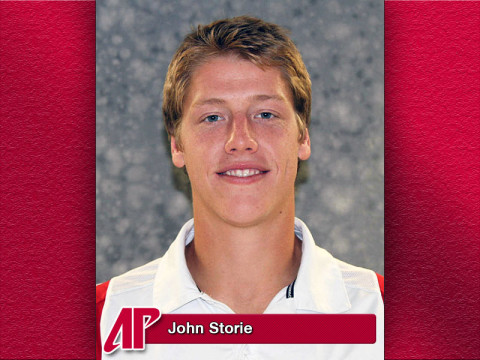 Storie and Tverijonas clinched the doubles point for the Govs in the semifinals, with an 8-6 victory over Eastern Kentucky’s Daridge Saidi and Joao Maio. Storie’s 7-6 (13-11), 6-0 victory against Maio at No. 5 singles clinched the match for Austin Peay and propelled the Govs to the OVC Championship match for the second time in the past three seasons.

Storie and Tverijonas again clinched the doubles point against Belmont in Sunday’s final, defeating Bruno Silva and Henrik Claesson, 8-3. Storie’s No. 5 singles win against Claesson (6-4, 6-4) put the Govs ahead 3-1 before sophomore Dimitar Ristovski’s championship-clinching No. 3 victory.

Heading into the NCAA Tennis Championships, beginning May 11th, Storie’s four-match win streak is the longest active streak among the Govs.