Dickson, TN – For the second time in three years Mother Nature prevented the final round of the Ohio Valley Conference Men’s Golf Championship from being played. With heavy rains throughout the area overnight and into Saturday, third round play never got underway and Austin Peay was declared the 2013 champions. 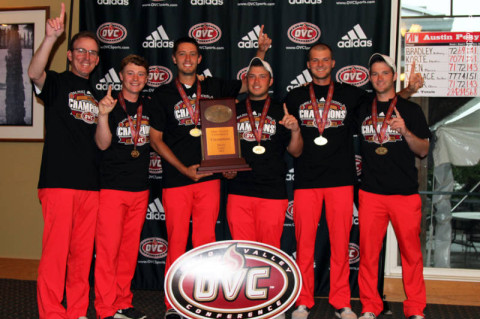 The OVC Championship victory was eighth overall for Austin Peay and first since the 2009 season. The Governors have also won titles in 1979, 1988, 1989, 2001, 2002 and 2003. The eight titles are the fourth-most in OVC history. The victory was especially sweet for Austin Peay who lost by a lone stroke on the final hole a season ago.

The Governors had led by five strokes after the first round and extended the final advantage to nine strokes before the final round was cancelled. The 2011 OVC Men’s Golf Championship was also shortened to 36 holes due to weather; those two events are the only OVC Championships to not go the 54-hole distance over the past 13 years.

This year’s event was held at GreyStone Golf Club and played as a par 72 at 6,858 yards; it marked the fourth-straight year the event has been held at the course.

Austin Peay finished with a 36-hole total of 568 (-8), which was nine strokes better than two-time defending Jacksonville State (+1). Tennessee Tech (+5), who had its best round of the tournament on Friday (its score of 288 was the second-lowest of the event), finished third which marked the best finish for the squad since its runner-up finish (in a playoff) at the 2006 Championship. In its first OVC Championship Belmont finished fourth (+6) and was followed by Murray State (+8), Eastern Kentucky (+10), Morehead State (+11), Tennessee State (+12), SIUE (+16), UT Martin (+21) and Eastern Illinois (+33).

With the victory Austin Peay earned the OVC’s automatic bid into the NCAA Championship. The 2013 field will be announced on Monday, May 6th at 8:00pm CT on NCAA.com. The NCAA Regionals will take place on May 16th-18th and will be held at six sites – Baton Rouge, La., Tallahassee, Fla., Columbus, Ohio, Fayetteville, Ark., Tempe, Ariz. and Pullman, Wash. The National Championship will be held May 28th – June 2nd at the Capital City Club/Crabapple Course in Atlanta.

The individual medalist title was claimed by Murray State senior Patrick Newcomb who had rounds of 69-70 to finish at 139 (-5) and top the field by a stroke. It is the third overall OVC medalist crown for the Newcomb family as Patrick’s older brother Nick Newcomb won the OVC Championship in 2008 and 2010.

It marks the 11th time a Murray State golfer has been the individual medalist at the OVC Championship. It also marked the fifth time in the last six years the medalist race was determined by a lone shot. As the medalist Newcomb will receive an automatic bid to compete as an individual in the NCAA Championship. 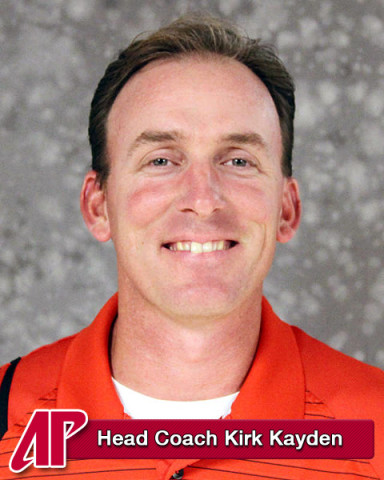 Austin Peay’s Kirk Kayden was voted OVC Coach of the Year by his peers. He led the Govs to six tournament victories (five regular season wins plus the OVC Championship) during the year, including four titles this spring. It is the first OVC Coach of the Year for the ninth-year head coach, who becomes the fourth different APSU coach to earn the honor (those winners have won the award six total times) and first since Mark Leroux won back-to-back awards in 2002 and 2003.

The coaches voted Newcomb, the individual medalist, the OVC Player of the Year for the second consecutive year. He becomes the fourth-straight Murray State golfer to win the award (joining his brother Nick in 2010 and Cameron Carrico in 2011), marking only the second time in OVC history a school has won the honor four-straight years (EKU from 1982-86 was the other). He is the seventh OVC golfer to win the medalist crown in back-to-back years and first since former Tennessee Tech star, and current PGA Tour professional, Scott Stallings won in 2006 and 2007. Overall he is the eighth different Racer to win the award (a total of 10 times).

Despite winning four OVC Championships since joining the OVC in 2004, this season marked the first time Jacksonville State had finished as the runner-up. All-OVC selection Tomasz Anderson had identical rounds of 71 to finish at 142 (-2) and tie for eighth place. Dorian Fernandez finished one shot back in 10th (143, -1).

Tennessee Tech’s surge from sixth to third was powered by Adam Cunningham’s 4-under round of 68 on Friday. Lee Whitehead was the team’s top finisher, tying for eighth place after rounds of 70-72 (142, -2).

Playing in its inaugural OVC Championship, Belmont finished fourth overall after the freshman Van Horne produced a two-round total of 141 (-3).

Newcomb’s victory powered Murray State to a fifth place finish. Freshman Preston French, an OVC All-Newcomer selection, had a score of 68 during the second round to finish tied for 29th overall (149, +5) with teammate Jared Gosser.

Host Morehead State was buoyed by a 15th place finish from Matthew Logan who had a two-round total of 145 (+1).

After not placing an individual on the All-Tournament team since 2004 (Robert Dinwiddie – who currently plays on the European Tour), Tennessee State put two players on the team this year, the first time the Tigers had multiple players earn that honor in the same season. All-OVC selection Cameron Scitern had rounds of 71-70 while sophomore James Stepp fired a 4-under score of 68 in round two as both finished at 141 (-3).

UT Martin overcame a rough round one to improve by 13 strokes in round two. Caballero (140, -4) finished as the runner-up (one shot behind the medalist) which was the highest finish for a Skyhawk golfer since joining the league in 1993. Tyler Shellnut also finished in the Top 10 after a two-round score of 143 (-1).

Eastern Illinois was led by Kevin Flack who finished in a tie for 17th after identical rounds of 73 (146, +2).