Clarksville, TN – Senior Tyler Rogers, of the Austin Peay State University baseball team, has been named the Copies in a Flash APSU Athlete of the Week. 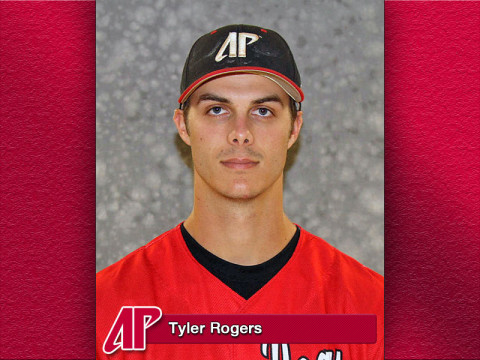 Rogers became the Ohio Valley Conference’s all-time single-season leader in saves by picking up the save in both halves of the Govs doubleheader against Evansville, Wednesday, and also picked up a Friday save in Game 2 at Eastern Kentucky.

The Littleton, Colo., native picked up his team-high tying sixth win in the finale against the Colonels. He tossed the final 2.2 innings, allowing just one hit and striking out two for series-winning victory.

Rogers is on the verge of two milestones that would leave him in elite company amongst all collegiate closers. With 10 regular season games remaining, Rogers needs four saves to become the OVC’s career saves leader (32 by Jacksonville State’s Todd Hornsby, 2010-12). His 17 saves on the season leads the NCAA by three over his next closest competition and he is six saves away from tying the NCAA single-season mark (23 – Jack Krawczyk, Southern California, 1998).