Paktya Province, Afghanistan – With a full moon to light the sky, a pair of U.S. Army CH-47 Chinook helicopters broke the deafening silence of the night as they descended into the valley where the village of Sahak, Afghanistan lay still.

Slowly the sound of the Chinooks faded into the night, only to be replaced by the sound of dogs barking in the distance as the Soldiers from “Bulldog” Company B, 1st Battalion, 187th Infantry Regiment, 3rd Brigade Combat Team “Rakkasans,” 101st Airborne Division (Air Assault), zigzagged their way through the maze of narrow footpaths that separate the wheat and sweet clover fields.

They made their way to the first staging area some several hours later, where the Soldiers began to prepare for what would be an eventful 48 hours to come.

As the Soldiers moved into their next position during the first hours of daylight, a force of more than 450 Afghan National Army, Afghan Uniformed Police, Afghan National Civil Order Police and Afghan Critical Response Teams from Zormat district simultaneously moved into Sahak to conduct a clearing patrol to search for any insurgent activity.

“They have conducted this type of operation here in the past, but the insurgents have always managed to slip out,” said Lt. Col. Kelly Kendrick, commander, 1st Bn, 187th Inf. Reg.

The mission was to deny any avenue of escape as well as prevent any enemy fighters from coming into the area of Sahak to attack the ANA force.

The mission was a success.

“They didn’t expect to run into us,” said Kendrick. 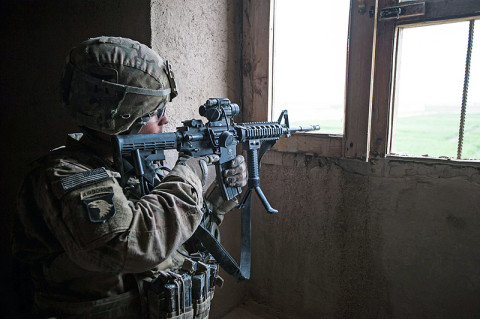 Nearing the end of the first day of operations, a force of nearly 30 insurgents were met by the Bravo Soldiers and their Afghan counterparts in a small-arms battle that lasted nearly three hours. The action repelled the insurgents and denied them their usual safe havens.

At the end of the battle, Afghan and U.S. forces detained nearly 10 suspected insurgents for questioning.

“We encountered the enemy force that we anticipated,” said Kendrick. “We knew that they would come from the same direction that we were orientated to. Without a doubt, they were trying to come through here.”

After the dust settled for the day, the rain began to fall and the Soldiers headed back to their staging area for a long, rain-soaked night. At the break of dawn, a squad of Soldiers from 1st platoon headed back out to patrol the surrounding area in search of any remaining insurgents. 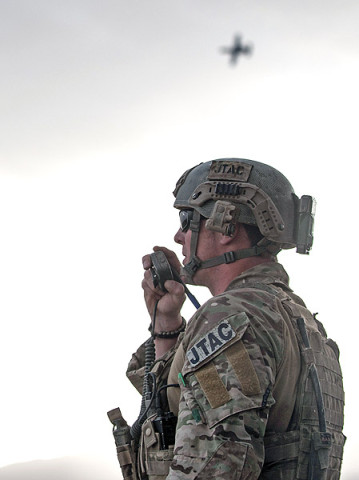 The day wound on and several reports of the growing possibility of follow-on attacks came in, but the Bulldog troops stayed ready. Then, without warning, the silence was broken again with sounds of gunfire. Only this time it was a much smaller force and much farther away than it had been the day before.

Within minutes the sounds of gunfire were drowned out by the roar of jet engines and twirling rotors.

As the rain started falling again a couple of U.S. Air Force A-10 Thunderbolt IIs and U.S. Army AH-64 Apaches began flying low over the wheat fields in search of the enemy positions.

With their arrival, the skirmish ended as abruptly as it had begun.

Shortly thereafter, the sun began to set and the rain lingered on as the Soldiers packed their rucksacks. Ahead of them was their last walk through the mud and puddles that replaced the previously dry road.

The walk to the pick-up site was a welcomed uneventful experience. Once the Soldiers reached their destination, they dropped their packs, rested and talked. Some even smoked cigars as a celebratory moment.

“For me it was the first time I have been on the ground with these guys, and to see the work they do every day really puts everything in perspective,” said 1st Lt. Jesse Cooper, battalion communications officer-in-charge,1st Bn, 187th Inf. Reg.

During the 48-hour mission, the Soldiers of Company B, along with their ANA counterparts, successfully captured more than 20 suspected insurgents.

As for the future of the Sahak valley, Kendrick feels confident the 1st Kandak and his forces have made it uncomfortable for the insurgents to remain in the area.

One local shopkeeper talked about how nice it was to see ANA forces coming to the area to clean out the insurgents early in the spring and not let them get out of hand.