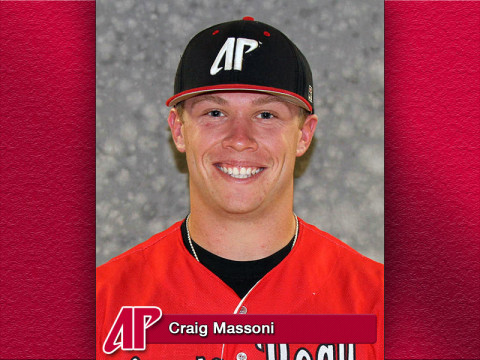 Massoni, of Danville, CA, went 6-for-12 at the plate against Morehead State, recording two hits in each game of the series. He also finished with a double, home run and five RBI as the Govs swept their third OVC series this season.

Massoni opened the Morehead State series with a 2-for-4 outing that included a two-run, game-tying home run in the ninth inning. He followed that with a 2-for-3 effort in Game 2, rapping a two-run single that put Austin Peay ahead 5-0 in the second inning. Massoni finished the weekend with a 2-for-5 performance with a RBI double in the eighth inning.

It is the second adidas® OVC honor for Massoni who also earned the honor March 4th. It is the seventh time this season an Austin Peay baseball player has earned weekly honors. Massoni joins senior outfielder Cody Hudson and senior closer Tyler Rogers as Governors who have earned two weekly honors this season. Senior shortstop Reed Harper was tapped for the Governors other weekly honor.

Austin Peay has the week off for finals before return to action with a three-game OVC series at UT Martin, beginning with a 6:00pm, Friday contest.