Clarksville, TN – Senior Dustin Korte, of the Austin Peay State University men’s golf team, has been named the Copies in a Flash APSU Athlete of the Week.

At last week’s NCAA Division I Men’s Golf Regional in Tempe, AZ, Korte finished eighth in the 75-player field with a six-under par 204 (64-71-69) and advanced to next week’s NCAA Championship. 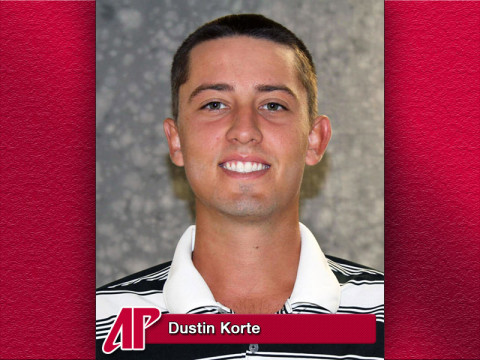 He opened the tournament by firing a school-record 64 to propel the Govs to a third-place finish after Day One in Tempe. He went without a bogey on the round and birdied holes No. 1, 2, 11 and 16, and added an eagle on the par-5 14th hole for good measure.

Although the Govs as a team faded to a tie for seventh place along with ninth-ranked Duke, Korte played even-par golf over the final two days to punch his ticket as the regional’s individual qualifier for the NCAA Championship at the Capital City Club’s Crabapple Course, May 28th-June 2nd in Atlanta, GA.