Khowst Province, Afghanistan – Soldiers from the Security Force Advise and Assist Team 11, along with the assistance of Soldiers from Easy Company, 2nd Battalion, 506th Infantry Regiment, 4th Brigade Combat Team, 101st Airborne Division, met with Afghan National Army Soldiers at one of their combat ouposts outside of Shur Kalay, Afghanistan, on May 25th.

The SFAATs are composed of 10 to 20 Soldiers performing advisory roles for Kandaks, or battalion sized units. They have been visiting combat outposts to advise and assist Kandaks for some time now, and with the drawing down of U.S. troops on the horizon, helping the Afghan National Security Forces get to a point of sustainability has never been more important.

“I can not stress enough the importance of the mission and the limited timeframe that we have to do it,” said Cpt. Colin LeBeau, intelligence officer for SFAAT 11, 162nd Infantry Brigade, attached to 2nd Bn, 506th Inf. Reg., 4th BCT “Currahee”, 101st Abn. Div. “We have to be successful now to get these guys to be independent and effective.” 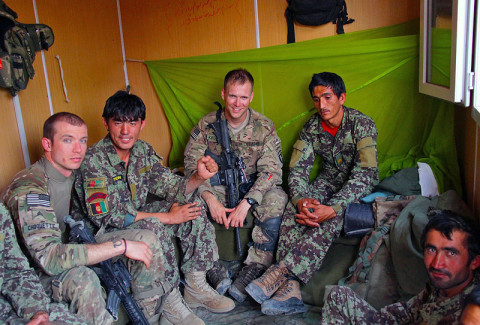 Afghan Soldiers are feeling their independence on the battlefield as the number of International Security Assistance Force led missions decreases as ISAF moves from “shoulder-to-shoulder” assistance to “over-the-shoulder”.

“We are able to see the Afghan National Army fighting this war in their own way, not shoulder-to-shoulder but on their own,” said 1st Lt. James Kromhout, 1st platoon leader, Easy Co, 2nd Bn, 506th Inf. Reg., 4th BCT, 101st Abn. Div. “We are able to get out and see the ANA in action all across Khowst Province. It’s pretty rewarding.”

Seeing the results of the efforts put forth through the advising of the ANA is rewarding as well.

“I get to hang out with the Afghan people on a daily basis and actually see the effect on people’s lives and on the mission,” said Sgt. Erik Choquette, SFAAT 11 medical advisor with the 162nd Infantry Brigade, attached to 2nd Bn, 506th Inf. Reg., 4th BCT, 101st Abn. Div. “One of the biggest parts of our job is developing inter-personal relationships with the Afghans.” 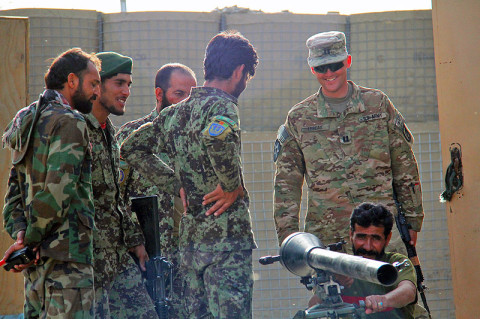 Working through those difficult situations is what makes an SFAAT successful.

“I’ve worked with the SFAATs since we got in country about a month ago and these guys really get the nuances of not just how an army is aggressive but how an army is successful,” Kromhout said. “The SFAAT mission is to work themselves out of a job, and they are doing a good job of it.”