Washington, D.C. – When NASA’s Mars rover Opportunity blasted off from Cape Canaveral in 2003, many onlookers expected a relatively short mission.  Landing on Mars is risky business.

The Red Planet has a long history of destroying spacecraft that attempt to visit it. Even if Opportunity did land safely, it was only designed for a 3-month mission on the hostile Martian surface.

Few, if any, imagined that Opportunity would still be roving the red sands of Mars–and still making discoveries–ten years later.

On July 7th, 2013, Opportunity celebrates the 10th anniversary of its launch and more than 9 years on Mars.

Opportunity is celebrating by driving. The rover is currently en route to “Solander Point,” a place on the rim of Endurance Crater where a treasure-trove of geological layers is exposed for investigation.

After nine-plus years of traveling, Opportunity recently set the US space program’s all-time record for mileage on another planet. The milestone occurred on May 15th, 2013, when the rover drove 80 meters, bringing its total odometry 35.760 kilometers or 22.220 miles.

The previous mark had been held by the Apollo 17 moon rover, which astronauts Gene Cernan and Harrison Schmitt drove for 35.74 km (22.21 miles) across the lunar surface in December 1972. 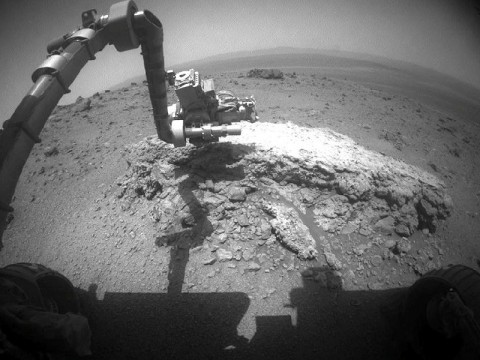 NASA’s Mars Exploration Rover Opportunity used its front hazard-avoidance camera to take this picture showing the rover’s arm extended toward a light-toned rock, “Tisdale 2,” during the 2,695th Martian day, or sol, of the rover’s work on Mars (August 23rd, 2011). (Photo by NASA/JPL-Caltech)

Over the years, Opportunity’s travels have been punctuated by hundreds of stops to photograph and sample the Martian landscape. The surface of Mars of today is bone dry and hostile to life as we know it. Opportunity’s mission is to hunt for places where it wasn’t always so, places where ancient water might have nourished life forms native to Mars.

So far so good; the rover has found abundant evidence that liquid water was once present.  For the past 20 months, Opportunity has been “working” the rim of Endeavour Crater. There, Opportunity found deposits of gypsum probably formed from groundwater seeping up through cracks in Martian soil. Also, Opportunity has also found signs of clay minerals in a rock named “Esperance”.

“A lot of water moved through this rock,” says Steve Squyres of Cornell University, principal investigator for the mission. “These results are some of the most important findings of our entire mission.”

For one thing, while Opportunity’s most recent stop, Cape York, exposed just a few meters of geological layering, Solander Point exposes roughly 10 times as much. A visit to Solander Point will be like reading a Martian history book.

Second, and perhaps more importantly, there are north-facing slopes at Solander Point where the rover can tilt its solar panels toward the sun and ride out the coming winter. The minimum-sunshine days of this sixth Martian winter for Opportunity will come in February 2014.

If Opportunity survives another year–and who now would bet against it?–the rover might yet break the all-time extraterrestrial driving record set by Lunokhod 2, a Soviet robotic vehicle that traveled an estimated 26 miles (42 km) across the Moon in 1973.

After that lies the 26.2 mile mark. In other words, stay tuned for the first Martian Marathon.

To follow Opportunity and other rovers on Mars, please visit http://marsrovers.jpl.nasa.gov/ [2]