Clarksville, TN – Austin Peay State University announced today that 6-10 senior center Matt Hasse medically has been forced to end his basketball career because of a chronic back problem. 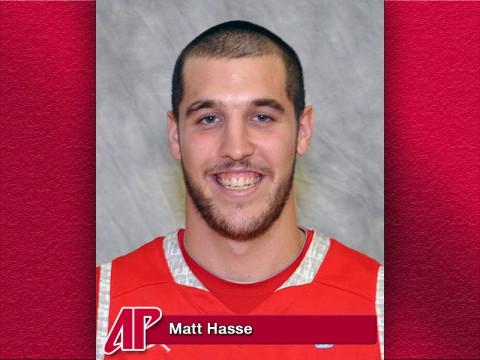 “It is unfortunate for Matt to see his career to end this way,” APSU head coach Dave Loos said. “He experienced discomfort during last season. It got progressively worse as the season progressed. I remember in our shoot-around at Liberty that Matt went up for a shot and never released the ball—it (the back) got him.

“Matt has been a really good guy in the program—he always has been very positive—and gave everything he had. I think if you would poll our players for best teammate he would be right there in the conversation.

“He has been very good in the classroom and has been extremely active on campus, in particular in SAAC (Student Athlete Advisory Council).”

Hasse played in only 19 games in 2012-13. He initially injured his back in the Govs’ January 19th contest at home against Eastern Illinois. He sat out three straight games before playing three minutes against Tennessee State, February 7th, and re-aggravating the injury.  He sat out the next three games before again re-aggravating the injury during shoot-around prior to the SIUE game, February 16th. Hasse made brief appearances in the Govs’ final two games of the 2012-13 season.

Hasse, who has a desire to enter coaching after college, will remain as a student assistant for the 2013-14 season.