Paktika Province, Afghanistan– The Forward Operating Base Sharana Freedom Fest went off with a bang July 7th, with the 101st Airborne Division Rock Band “Ambush” returning for a repeat performance.

Fireworks were not allowed but the United Service Organization, Morale Welfare and Recreation as well as FLUOR contracted cooks put together an event that would put the lack of a light show in the back of everyone’s mind.

At 8:00am, the FOB Sharana town square was a silent parking lot.

Throughout the morning and afternoon Soldiers, contractors, and volunteers toiled under the summer sun transforming it into a full blown carnival. The volunteers filled the area with carnival booths and live music while Soldiers and civilians from across the base began to relax and enjoy the evening.

The FOB Sharana USO, headed by Ms. DJ Stanhope, location manager, and her team of volunteers went all out for the celebration. They set up corn-hole, water balloon toss, and the surprisingly challenging ring toss for the entertainment of our residents. The volunteers set up more than ten events throughout the evening. 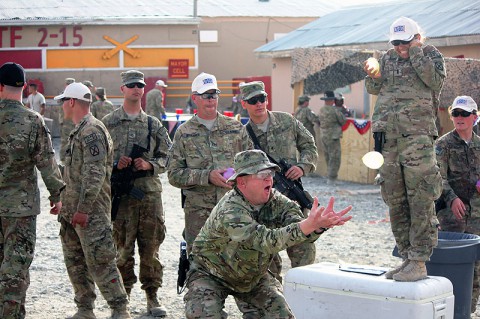 The USO provided prizes for different events, which anyone could win through winning tickets by playing different games. Prizes included Amazon.com gift cards, an iPod speaker system and a new digital camera.

As Freedom Fest kicked off, the grills fired up and the town square filled with the smells of steaks, chicken, burgers, and bratwurst as the FLUOR food service team prepared the barbeque.  Once the food line opened, it didn’t stop for more than two hours.  FLUOR provided more than five hundred soldiers and civilians a fresh and delicious meal to kick off the barbecue season.

For the second time this year “Ambush”, the 101st Airborne Division rock band, took the stage at FOB Sharana. Spc. Xavier Young, lead vocalist, belted out the lyrics to the first of many songs. The band played songs ranging from Elvis to Radiohead filling the square with great tunes as our residents ate and enjoyed the carnival.

“The energy in the crowd was exceptional,” said Spc. Stephen Thacker, Ambush’s drummer, “making the performance the highlight for the members of Ambush.”

As the band left the stage and the carnival events came to an end, Ms. Stanhope pulled out one last surprise. Without our knowledge she coordinated with actor/comedian Kevin Hart and the cast and crew of “Think Like a Man 2”.  From the movie production set Kevin and his compatriots recorded a greeting for the troops on FOB Sharana wishing them a happy and safe Independence Day.

“I enjoyed the video most,” said 1st Lt. William Bloomquist, of 1-89 Cav, “because it really helped to tie in why we were celebrating and it was great to hear that people back home are thinking of us.”