Clarksville, TN – The Roxy Regional Theatre does it again with their exquisite production of Rodgers and Hammerstein’s  musical “South Pacific”. Stars John Boehr and Alicia Kelly give soulful vocal performances that brings to life the emotions and anguish of their characters on the Roxy Stage.

Backed by Michael Spaziani, Elena Pascullo and the rest of this powerhouse cast, “South Pacific” creates a chemistry with the audience that takes you back to a time of men and women torn by war, romance, and prejudice.

“South Pacific” is set on an island paradise during World War II and centers on an American nurse Nellie Forbush (Alicia Kelly) stationed on the island who falls in love with a middle-aged French plantation owner Emile de Becque (John Boehr) but struggles to accept his mixed-race children.

A secondary romance, between a U.S. lieutenant Joseph Cable (Michael Spaziani) and a young Tonkinese woman Liat (Elena Pascullo), explores his fears of the social consequences should he marry his Asian sweetheart.

These two parallel love stories are set against the backdrop of a score featuring such songs as “Some Enchanted Evening,” “I’m Gonna Wash That Man Right Outta My Hair,” “This Nearly Was Mine” and “There is Nothin’ Like a Dame.” 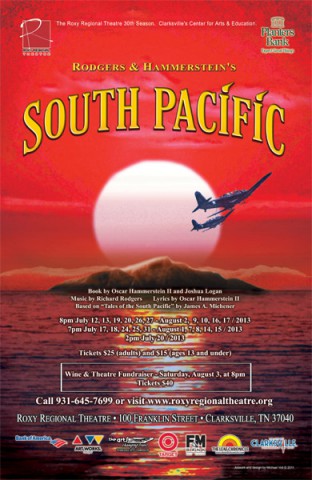 This production is made possible in part through the generous support of Planters Bank.

“South Pacific” runs through August 17th, playing Wednesdays and Thursdays at 7:00pm and Fridays and Saturdays at 8:00pm.