Clarksville, TN – Firing one of the two under-par rounds recorded on August 3rd, at Swan Lake Golf Course in the opening round of the 2013 Heritage Bank Clarksville Senior City Amateur, defending tournament champion Joey Long holds a one-shot lead heading into the final 18 holes of play. 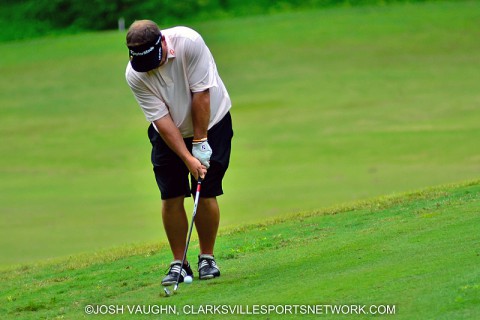 Winning last year’s event in a two-hole playoff versus Bobby Yingling, Long carded a two-under 69 in the opening round, one shot better than Brad Van Kirk’s opening round one-under 70.

Long started off a little slow, going one-over with a bogie on the second hole, but got back to even par with a birdie on the fourth hole.

Long would remain one-under until the 11th hole, where he carded his only bogie on the back side to move back to even par.

He would close out the round with two birdies, on the 13th and 16th holes, and four pars to finish up at two-under 69.

Van Kirk, who already has wins this summer in the senior division at the Commanding General’s and the Bud Two-Man Scramble, will once again find himself in the final group of the day with a shot at taking home another title.

“I was pretty happy with my game today,” Van Kirk said. “I knew (Long) turned at two-under, but I wasn’t sure what he shot (overall). I just knew I needed to get it under par to be within striking distance, so I’m happy with finish.

“I like being in the final group. I like to know what I have to do to be able to win.”

Joining Long and Van Kirk in the final foursome will be Jim Duttweiler and Bruce Walker, who finished with even par rounds of 71.

“To be honest, I was very fortunate today with my round,” Walker said. “I had a couple of holes where I hit it kind of sideways and got lucky and made a few putts.

“I just kept it in play and hit my irons really well – especially my short irons all day.”

Three golfers, Harold Hensley, Rick Richardson and Greg Guinn are three shots back at one-over 72 after the first round – with eight more golfers within seven shots of the top.

Hensley’s score — which still has him in the running for the overall tournament title — is the top finish for super seniors (golfers ages 65-and-older).

“I started off kind of bad being three over after the first six holes,” Hensley said. “I managed to birdie number seven and number nine to get it back to one-over par.

“The back side I played pretty well with one bogie on 17 from right out in front of the green, but over it was a pretty good round.”

Final-round tee times start at 8:00am August 4th at Swan Lake Golf Course, with the first-round leaders scheduled to begin at 10:40am.