Nashville, TN – The Tennessee Titans (0-1) continue the preseason this week as they travel to Cincinnati to face the Bengals (1-0). Kickoff at Paul Brown Stadium (capacity 65,515) is scheduled for 7:00pm ET/6:00pm CT on Saturday, August 17th.

The matchup is only the second all-time preseason game between the Titans and Bengals. The first was a 2003 meeting in Cincinnati that the Titans won 23-15.

The Titans began the preseason at home last week against the Washington Redskins. Running backs Chris Johnson and Shonn Greene each scored a rushing touchdown in the first quarter, but ultimately the Redskins prevailed by a final score of 22-21.

Johnson, who ranks second in the NFL since 2008 with 6,888 rushing yards, took his second carry 58 yards for a score and was given the rest of the game off. On the Titans’ next offensive possession, Greene, an unrestricted free agent signee this offseason from the New York Jets, reached the end zone on a 19-yard run.

Quarterback Jake Locker and most of the Titans offensive starters played most of the first half. In five drives, including a nine-play touchdown drive, Locker completed seven of 11 passes for 58 yards, no touchdowns, no interceptions and a 77.1 passer rating.

For the first time since being drafted with the eighth overall pick in 2011, Locker began the preseason with a firm hold on Tennessee’s starting quarterback job. The third-year pro was a backup behind Matt Hasselbeck as a rookie in 2011, and in 2012, the two battled for the starter’s role through the offseason and training camp. Locker’s statistics through two campaigns include 211-of-380 passing for 2,718 yards, 14 touchdowns and 11 interceptions, plus two additional rushing touchdowns.

The Titans are in their third preseason under head coach Mike Munchak, now in his 32nd season as a player or coach with the franchise. His total of 15 wins from 2011-12 was the third highest number in team history in a head coach’s first two full seasons. 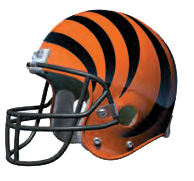 The Bengals opened their preseason schedule last week in impressive fashion, winning 34-10 on the road against the defending NFC South Champion Atlanta Falcons.

Bengals head coach Marvin Lewis is entering his 11th season with the club. In 2012, he led the Bengals to a 10-6 finish and an AFC Wild Card berth, marking the third time in four years the Bengals made the postseason.

Cincinnati’s quarterback, Andy Dalton, was a member of the same 2011 draft class as Locker.

The second-round pick has passed for 47 total touchdowns and more than 7,000 yards in his first two seasons and went to the Pro Bowl after his rookie campaign. His primary target is A.J. Green, Cincinnati’s first-round pick in 2011 who already has 162 receptions, 2,407 receiving yards and a pair of Pro Bowls under his belt.

The Bengals return most of their defensive starters from last season’s squad that ranked sixth overall (12th in rushing defense, seventh in passing defense), including All-Pro defensive tackle Geno Atkins and defensive end Michael Johnson. The duo combined for 24 sacks in 2012.

In the 54-year history of the organization, only one other NFL team—the Pittsburgh Steelers—has faced the Titans/Oilers more frequently than the Cincinnati Bengals. There have been 73 all-time meetings with the Bengals, while the Steelers have squared off 74 times against the Titans/Oilers.

In 1970, Riverfront Stadium (later named Cinergy Field) opened, where the Bengals would call home through the 1999 season. The start of the 1970 season also marked the beginning of the newly-formed AFC Central Division, giving new life to the Bengals and Oilers rivalry. The two teams met at least twice per season each year from 1970–2001, until realignment split up the division in 2002. The Titans moved to the AFC South, while the Bengals were placed in the AFC North.

The Titans have won the majority of their games with the Bengals since moving to Tennessee.

They are 11-5 in that time period (1997-present), including a seven-game winning streak from 1998-01. The streak included five consecutive road victories for the Titans, three of which occured at Paul Brown Stadium.

On September 12th, 1999, the Bengals helped the Titans open their new home in the first regular season game at LP Field. The Titans won 36-35 on a dramatic last-second field goal.

In Week 9 of the 2011 season, the Titans were held scoreless in the second half, while Cincinnati rookies Andy Dalton and A.J. Green made plays at critical moments to help clinch a 24-17 Bengals victory at LP Field.

Dalton completed 22 of 39 passes for 217 yards, three touchdowns and no interceptions (97.9 passer rating), while Titans quarterback Matt Hasselbeck was 24-of-41 for 272 yards and two touchdowns without an interception (94.8 rating).

The Bengals took a 21-17 lead with 10:52 to play in the fourth quarter after a 13-play, 75-yard series. Green recorded a 23-yard catch early in the drive, and later, on third-and-18, he snared a 20-yard pass from Dalton, one of eight third-down conversions on 16 attempts for Cincinnati. Green finished the game with a team-high seven receptions for 83 yards.

Then, on third-and-goal from the five-yard line, Dalton capped the drive with a touchdown pass to wide receiver Andre Caldwell.

The Titans had four more possessions to attempt to either take the lead or tie the game, but were unable to sustain any of the drives. With the Titans still trailing by four points, tight end Jared Cook was stripped of the ball by Bengals cornerback Nate Clements at the Tennessee 20-yard line. That led to the final score of the game, a 36-yard field goal by Mike Nugent at the two-minute warning.

Earlier in the game, the Titans took a 3-0 lead midway through the first quarter. A 20-yard run and 21-yard reception by running back Chris Johnson helped set up Rob Bironas’ 43-yard field goal.

The Titans responded with a long scoring drive of their own, marching 78 yards on nine plays. Not long after Johnson recorded an 18-yard run, tight end Craig Stevens posted a 25-yard reception. Then, facing a fourth-and-three at the Bengals’ 10-yard line, the Titans converted on a five-yard pass from Hasselbeck to Hawkins. Hasselbeck subsequently completed an eight-yard touchdown pass to Damian Williams for a 10-7 lead.

The Titans got the ball back at their own 19-yard line with 2:55 remaining in the first half. After a pair of third-down conversions, the Titans drove to the Cincinnati 16-yard line with no timeouts remaining. That is when Hasselbeck found Hawkins in the back of the end zone for a touchdown with eight seconds remaining in the half. But it would be their final score of the game.