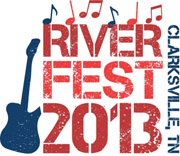 The Clarksville based Southern Rock and Roll band will be playing hits such as What’s Your Name, Free Bird, Simple Man, Tuesday’s Gone, Gimme Three Steps and Sweet Home Alabama to name a few.

The Skynyrd Lynyrd band is a group of seasoned veterans that enjoy playing great rock-n-roll music.

With a line-up of talent that includes over 150 years of experience between the band, Skynyrd Lynyrd delivers  southern rock at its greatest.

Make sure to come down to Clarksville’s Riverfest Friday and rock with Skynyrd Lynyrd.

Riverfest will be held September 6th-7th, 2013 along the banks of the Cumberland River at McGregor Park, located at 640 North Riverside Drive. Admission and entertainment at the Festival are free and open to the public.

More announcements will be made soon, as new events and entertainment are finalized and will be available on the Festival website, www.clarksvilleriverfest.com.