Fabbro scored twice in the Lady Govs 3-2 comeback victory at St. Bonaventure, Friday. Trailing 2-1 in the second half, the Coquitlam, British Columbia native scored the equalizer in the 77th minute and netted the game winner – her conference-leading third during the 2013 campaign – in the 88th minute to keep the Lady Govs unbeaten streak alive. 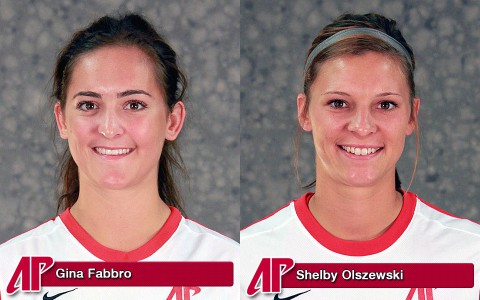 With five goals in 2013, Fabbro is second on the team behind senior Tatiana Ariza and tied for second in the OVC with SIU Edwardsville’s Kayla Delgado. Fabbro is the first Lady Gov to take home OVC Offensive Player of the Week honors since Emily Perkins took the October 30th, 2012 honor.

“It benefits us to have threats offensively – like Gina, Andy (Quiceno) and Courtney (Sheppard) – to take some of the pressure away from Tatiana,” said head coach Kelley Guth. “Gina’s put herself in position to score important goals for us. She’s such a hardworking player; it’s nice to see her get the benefits from her hard work paying off.”

“Shelby’s playing really well,” Guth said. “She’s getting into her comfort zone. She’s a ballwinner, great in the air and a threat offensively. She’s come on really strong and helped our backline.”

Austin Peay has staked a claim to the Defensive Player of the Week award in 2013, winning three of the first four honors after winning the award just six times since its inception in 2003. This is Olszewski’s second honor – she also won the season’s inaugural award, August 27th. Senior Emily Kink won last week’s award. It marks the first time two Lady Govs have won weekly awards in the same week since Tatiana Ariza (Offensive) and Haylee Shoaff (Defensive) took weekly honors October 23rd, 2012.

The Lady Govs are off this weekend before opening the OVC schedule at home against defending OVC Tournament champion UT Martin, 7:00pm, Friday, September 27th in a rematch of last season’s OVC Tournament Championship contest.