It was Ohio’s third straight victory after a pummeling by Louisville in the opener. Austin Peay will take a 0-4 record into its bye week. 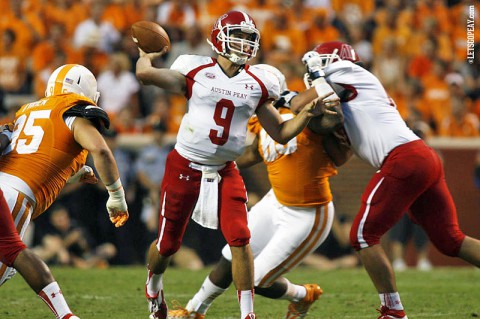 Tettleton, the Bobcats star quarterback who also is the son of former major league catcher/designated hitter Mickey Tettleton, was 9-of-11 for 135 yards in the opening half, completing scoring tosses of 6, 53 and 23 yards in the first 16:10. Those three scoring tosses occurred before the Governors could gain their first first down—APSU had four pre-snap penalties in the opening half which hampered the offensive effort.

The Governors did gain footing in the second quarter and moved the ball consistently through much of the game’s remainder. In fact, the Govs achieved three scoring opportunities, thanks largely to a strong running game, but all ended in missed field goals, the final one being blocked.

The Govs also forced three fumbles on the day, one a strip by Montez Carlton as a Ohio wide receiver was about to score after a long pass and run.

Offensively, however, the Bobcats finished with 494 yards compared to 298 for the Governors, including a 251- to-155 rushing edge. Still, the Governors ground game showed its best so far in 2013. Sophomore Omar Williams came off the bench to rush for 103 yards, including a 57-yard run, while senior Tim Phillips ran for 69 yards.