Clarksville, TN – The Clarksville Community Concert Association (CCCA) held this season opener at the George and Sharon Mabry Concert Hall on Austin Peay State University Friday evening. The concert featured the Toomai String Quintet and what was the first quintet to be featured in a Clarksville community concert series event.

The program was entitled songs without words and featured a selection of choral music played with their five instruments performing the role of the voices. It was sublime. These five performers were able to draw the emotional complexity from the music with apparently effortless ease.

“They were Brilliant! Amazing! Virtuosic! and I especially liked the Ponce,”  said Christopher Groves a guitar Major at Austin Peay State University. 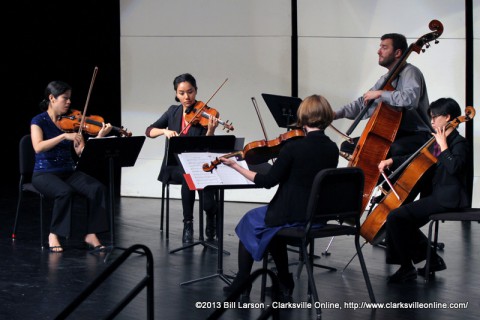 Josh C. a freshman at Collierville High School was more succinct in his appraisal as he exclaimed,  “It was awesome!”

Pastor Angela Roberts Jones from the Green Hill Church wasn’t feeling well, and thought she be forced to leave before the end of the concert, but the music held her until the end. “and thoroughly enjoyed it”.

Even though this was the season opener the second concert of the year in what is an ambitious season with four world-class classical musical performances remaining.

The next concert features the Los Angeles Guitar Quartet on Friday, November 15, 2013 at 7:30 PM.

Members of the Grammy award-winning Los Angeles Guitar Quartet, for three decades, have continually set the standard for expression of virtuosity among guitar ensembles, while perennially redefining themselves in their musical explorations popularly known as LAGQ, the Los Angeles Guitar Quartet is recognized as one of America’s premier instrumental ensembles. The LAGQ has given recitals in many of the worlds top venues. As one of the most charismatic groups performing today, there critically acclaimed transcriptions of constant masterworks providing fresh look at the music of the past, while their interpretations of works from the contemporary and world-music rounds continually break new ground.

It promises to be an amazing evening.

It is not too late to purchase season tickets to the Clarksville Community Concert series, there are four concerts remaining.

Following the Los Angeles guitar Quartet will be the baritone Andrew Garland, on January 16th; pianist Conrad Tao on February 4th; and the season closes out on April 5th with the Gregoire Maret Quartet in conjunction with Austin Peay State University’s Midsouth Jazz Festival.

Not only do subscribers get these amazing concerts they also receive complimentary passes to performances at the Pennyroyal Arts Councils live at the Alhambra series in Hopkinsville Kentucky.

Their remaining season includes Ring of Fire on October 28th; The Steel Drivers on November 15th; an evening with Ann Jones on January 25th; Route 66, finding that King Cole on February 8th; and closing out on April 11th with The Lion, the Witch and the Wardrobe.

Season Passes are a great value at $130.00; since bought individually tickets would run $30.00 per concert.