This year marked the unit’s 52nd anniversary of its activation, which originally took place September 21st, 1961, at Fort Bragg, NC. Although a time to celebrate, the “reunion” has become much more than just an annual gathering throughout the years.

The 5th SFG (A) has a storied history written by very quiet professionals, but more importantly they are a family that encompasses Veterans, past and present, families and friend of the Legion for generations past. 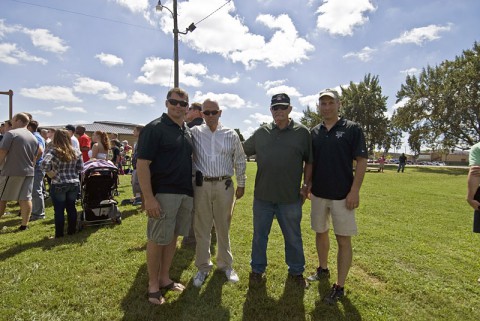 Col. John Brennan, commander of the 5th Special Forces Group (Airborne), Mr. Steve Woods, son of Staff Sgt. Lawrence Woods, Mr. Frank Roe, and Col. Frederick Prins, deputy commander of the 5th SFG (A) join together for a picture at the Group’s 52nd Reunion Picnic 21 held on Gabriel Field on Fort Campbell, Ky., Sept. 21, 2013. Approximately 49 years after Staff Sgt. Lawrence Woods, a Soldier with the 5th SFG (A) during the Vietnam War, was pronounced missing and presumed dead in Vietnam his remains were finally found just days before the Group’s Reunion in Cambodia.

The Reunion entails such events as an airborne operation, athletic and strength competitions, and activities specially designed for veterans and families spread throughout the week.

Regardless of the day of the week the anniversary date falls on, the celebration culminates in a large day-long picnic held on the Legion’s Gabriel Field, a place where members of the Legion are honored and memorialized for paying the ultimate sacrifice. The site is fitting to ensure all remember the Legion family members who could not attend the festivities.

The final day kicked off with remarks from the Legion Commander welcoming everyone and reminding them to not forget those Soldiers who could not be with them due to overseas deployments. As children smiled and ran about from bouncy castles to the water slide, Soldiers of the Group took part in the final competitions of the week culminating with the awarding of the “Commander’s Cup.” This year’s victor was 4th Battalion, 5th SFG (A).

The week-long event allowed the Soldiers, family members and veterans alike to observe and participate in various events, but more importantly it was a time to simply enjoy the camaraderie between the generations of Green Berets present and to visit with what has become the extended Legion family.

This year’s Reunion was special for many reasons, but for one member of the Legion family it was a reunion 49 years in the making.

Steve Woods was the son of Staff Sgt. Lawrence Woods, a Soldier in the 5th SFG (A) during the Vietnam War. On October 24th, 1964, Staff Sgt. Woods was aboard an Air Force aircraft conducting a resupply mission for ground forces operating in the border region between what was then South Vietnam and Cambodia. The aircraft was hit by enemy fire and crashed killing the crew of eight.

The bodies of seven crew members were located, but despite subsequent searches by ground forces Staff Sgt. Woods’ body was not found. Approximately 49 years after his father was pronounced missing and presumed dead his remains were finally found in Cambodia last week.

Just days after receiving and processing the news of his father’s recovery, Steve Woods stepped foot on Gabriel Field Saturday for the unit’s Reunion picnic and was introduced to the Legion family.

Steve Woods met and talked with current and former members of the 5th Special Forces Group and the Military Assistance Command, Vietnam – Studies and Operations Group (MACV-SOG) including those that served concurrently with his father in Vietnam.

Although only seven years old the last time he saw his father, Steve Woods reflected on the significance of receiving closure on his father’s life to the assembled crowd at the picnic.

“My wish is that all other families have the chance to gain closure like I have this week and to be accepted into an extended family like this one [5th SFG (A)],” stated Woods. “I won’t stop praying until everyone [POW & MIA] is home.”

In a testament to the importance of bringing all our service members home Tennessee Governor Bill Haslam declared the week of September 20th-26th POW/MIA Recognition Week in tribute to those service members captured by the enemy or still missing; a number totaling more than 83,000 service members dating back to World War II.

Even though Steve Woods has received closure with the finding of his father’s remains rest assured he will continue to pray for those families coping with the same uncertainty that he had dealt with for 49 years.