Clarksville, TN – The fall break was done, the temperature dropped and the Friday night lights were back on for District 10-AAA football as the Clarksville High Wildcats (3-6, 3-3 10-AAA) traveled across town to play the Kenwood Knights (4-5, 3-3 10-AAA).

If there was a spotlight among the lights, it would have shined on the Wildcats defense who created six Knights turnovers to give the Wildcats a 14-12 victory. 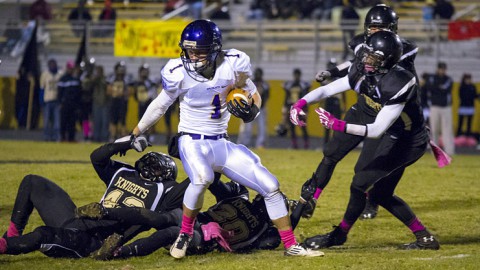 It was the Wildcats first road win of the season and it did not come easy. Knight’s quarterback Malcolm Perry had an explosive night that had his team ahead early and a chance to win with less than one minute left in the game.

However, Perry threw a high, floating jump ball on the run which Wildcat Lawrenz Guerra came down with for the interception. It was Perry’s third interception and fourth turnover of the game. With the ball and the lead, the Wildcats were able to take a knee and run out the clock for the win.

“Got our first win of the season against a very good Kenwood team,“ Wildcats head coach Ken Busbee said. “My hats off to coach Beaubien and his staff. They did a great job.”

Perry scored both of the Wildcats touchdowns. He rushed for 195 yards with one fumble and a touchdown. He also completed 5 of 12 passes for 82 yards and 3 interceptions. Perry scored the Wildcats second touchdown on a 55-yard punt return.

“Their quarterback is something else. He really showed it tonight. Not only on offense, but on special teams,“ Busbee said. “We couldn’t tackle him that well. But our defense stepped up in the second half.”

The Knights made the first score of the game at the end of the first quarter on their second offensive drive. They covered 73 yards in 8 plays. Perry capped off the drive with a 35-yard dash to the end zone. The Knights attempted a 2-point conversion, but failed and went into the second quarter ahead 6-0.

A failed onside kick attempt gave the Wildcats excellent field position on their ensuing offensive drive. Starting from the Knights 41-yard line, it took them six plays to find the end zone. Wildcat running back Brevon Johnson plowed through several Knights defenders 17 yards for the score. With a successful extra point kick, the Wildcats took a 7-6 lead.

Johnson led the Wildcats ground game, rushing for 127 yards and a touchdown.

“Brevon did a great job tonight for us in the back field,“ Busbee said. “He is a ninth grader. He is really coming along.”

A well executed fake punt, gave the Knights an opportunity to score on their next offensive drive. However, they failed to convert on fourth down and four on the Wildcats 10-yard line and turned the ball over on downs.

The Knights defense forced the Wildcats to go three and out on their ensuing offensive drive. They punted from deep in their own territory into the waiting arms of Perry, who sprinted 55 yards for the touchdown. Another failed 2-point conversion made the score 12-7.

The Knights missed another scoring opportunity from the red zone to increase their lead before halftime. Johnson fumbled the ball into the arms of Knight Rikeece Covington with 2:38 remaining in the half. The Knights marched all the way down to the 5-yard line with first and goal, but Perry threw his first interception of the game in the end zone, keeping the Knights within a touchdown of the Wildcats at halftime.

After struggling to tackle and slow down the Knights offense spearheaded by Perry, the Wildcats defense came out completely different in the second half.
“We just told them we have got to wrap up. You can’t just reach your hands out and expect to tackle,“ Busbee said. “We’ve got to make sure that we really wrap up. They brought the lumber in the second half.”

After forcing the Knights to go three and out on their first offensive drive of the second half, the Knights intercepted Perry again on their second drive in the third quarter.

They failed to score after the interception, but got another opportunity when Covington fumbled on the Knights third offensive drive. A 36-yard run by Johnson put the Wildcats in the red zone and three plays later Guerra ran 5 yards for the game winning score.

The Wildcats defense continued to “bring the lumber” the rest of the game. They forced two fumbles and an interception on the Knights last three offensive drives to keep their 14-12 lead and ensure the win.

“I’m very proud of how our kids came out and continued to fight tonight,” Busbee said.

Next week the Wildcats will finish the regular season on the road against Springfield. The Knights will travel across town to play Northeast.