Austin Peay (0-1) got out to a quick start to open the game. First, junior Kristen Stainback hit her first two three-pointers.

That was followed by sophomore forward Alexis Hardaway, who scored the next five points and APSU led 11-0 less than three minutes into the game.

Western Kentucky (1-0) broke through at the 17:39 mark on a Jalynn McClain layup. However, the host Hilltoppers could not make significant headway against the Lady Govs. WKU got within five points at the 15:32 mark only to see Austin Peay score the next seven points and push the lead back to 12, 18-6, at the 13:46 mark.

The Lady Govs would not surrender the lead the rest of the half and took a two-point, 35-33, lead into halftime. Austin Peay opened the second half with a jumper by Tiasha Gray to extend the time it held the lead.

Western Kentucky found some offensive flow after that opening basket and scored the game’s next nine points. Chastity Gooch’s three-point at the 18:03 mark gave WKU its first lead of the contest. She added another three-pointer on the next possession and Alexis Govan followed with a traditional three-point play to give WKU a three-point, 42-39, advantage.

Austin Peay did not fold and charged back to the lead with the game’s next five points. Sophomore forward Jennifer Nwokocha converted a traditional three-point play and Hardaway scored back-to-back jumpers to give APSU a 46-44 lead at the 16:19 mark. The lead would reach seven points thanks to freshman Beth Rates jumper at the 11:17 mark – the largest lead for either team in the half. 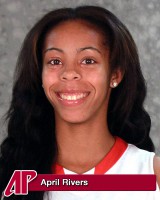 Western Kentucky would tie the game with a 7-0 run over the next four minutes, but could not wrest the lead away from the Lady Govs until the 3:50 mark. Gooch made a pair of free throws to give the Hilltoppers a 68-67 lead and then made a jumper on the next possession to extend the lead to three points.

Gray tied her career high with game-best 22 points, on 8-of-19 shooting, and had seven assists to lead the Lady Govs effort. Freshman guard April Rivers poured in 16 points in her debut. Stainback finished with 14 points while Hardaway added 10 points.

Austin Peay returns to action with a 7:00pm, Tuesday contest at Southern Illinois.