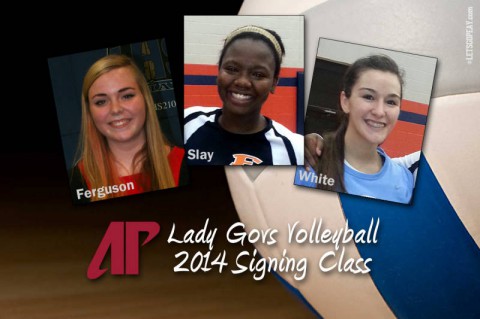 Ferguson, a 6-1 middle blocker, helped lead Lemont High School to a 102-47 record, two Illinois High School Association regional titles and a state sectional runner-up during her career. She recorded 437 kills, a .351 attack percentage and 295 blocks in four seasons. During her senior campaign, Ferguson was an all-conference selection and was named all-area by Joliet Herald News, Southtown Star and Suburban Life Newspapers after posting 160 kills and 111 blocks (1.32 blocks per set).

“Kelly is a dynamic middle blocker who can hit a variety of attacks and puts up a big block,” said Mott. “She plays with so much passion it is always exciting to watch her play. We are very excited that Kelly will be joining our program, not only is she a tremendous athlete but she is also a standout in the classroom.”

Slay, a 6-0 middle blocker/outside hitter, helped lead Ensworth School to Tennessee’s Division II Class AA state tournament and a 19-13 overall record in 2013. A two-year varsity starter, she recorded 454 kills as a senior, despite missing four weeks of the regular season. She posted 608 kills and 301 digs during a full junior campaign. Ashley is the younger sister of Tennessee basketball player Ron Slay.

“Ashley is a very raw and physical athlete,” Mott said. “One of the best things Ashley has to offer is her never quit attitude. It is exciting to have another local athlete to add to our roster. Ashley has and endless amount of potential and we are very much looking forward to seeing where she can go.”

White, a 6-0 outside hitter, helped lead St. Agnes to a 39-7 record this season and a second consecutive Tennessee’s Division II Class AA state championship. She was named the 2013 TSSAA Division II Class AA Tournament’s Most Valuable Player. White recorded 445 kills (5.17 per set) and a .375 attack percentage as a senior.

“Christina is a powerful athlete who can make things happen on the court,” said Mott. “She has an aggressive serve that makes her a weapon from the front and back row. We are excited that Christina will be joining our program and feel she will be a great option as an outside hitter.”