In addition, redshirt freshman Sammie Ebright was named to the OVC All-Newcomer team. 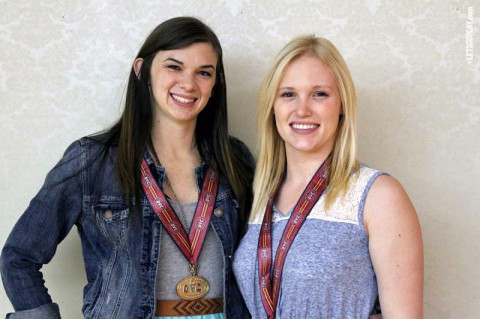 Henderson, of Fredericktown, MO, picked up her first career All-OVC honor and became the Lady Govs 18th first-team All-OVC recipient. During OVC play, Henderson led all league blockers with 75 stops, averaging 1.27 per set. She also ranked fourth in both service aces (21, 0.36 per set) and points scored (3.79 per set) while finishing fifth in attack percentage (.326).

“Lauren has been rock solid for us during conference play,” said Lady Govs head coach Taylor Mott. “She’s done everything we’ve asked of her and done it at a high level, which is what you want from a senior. Lauren was a big part of our performance in conference play this year. I am proud of her and glad the league recognized her performance.”

Ebright, of Subury, Ohio, becomes the 13th Lady Govs player to receive All-Newcomer honors and the first since current juniors Cami Fields and Hillary Plybon were named during the 2011 season. She was third on the team in kills during conference play, with 129 (2.05 per set) and added 30 blocks to finish fourth on the team in that category.

“Sammie stepped right up to the challenge of being our starting right-side this year,” said Mott. “She was one of our top hitters despite this being her first year on the floor for us. Sammie also is one of our emotional leaders on the court and always seems to find a burst of energy when we need it. This award is a good starting point in her career and I believe we’ll see better things from her down the road.”

Austin Peay opens OVC Tournament play with a 3:30pm (CT), Thursday contest against Southeast Missouri. The game can be seen live on the OVC Digital Network.