Clarksville, TN – With Governors football and Lady Govs volleyball seeing their respective seasons come to an end this past weekend Austin Peay fans will turn their full attention to basketball and indoor track, as the calendar get set to turn to December.

But before we get too immersed in hoops and hurdles action, let’s remember some of the highlights and accomplishments from Austin Peay’s cross country, football, soccer and volleyball teams during their Fall 2014 seasons.

With cross county you have to start with Lady Govs senior Xiamar Richards, who was Austin Peay’s leading runner in all seven races this Fall – including five top-five finishes overall in those meets.

Along the way, Richards set two school records – the first in the two-mile (10:57.11) bettering the mark by 25 seconds, and the second at the six-kilometer distance (21:38.21) and crushing the records by 58 seconds, while being named All-Ohio Valley Conference First-team. 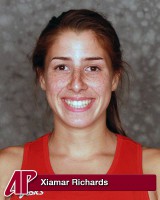 As a team, the Lady Govs won one in-season meet — Fleet Feet Invitational on September 14th in Huntsville, AL – while coming in sixth at the OVC Championships.

They also, along with the men’s team, won the OVC Team Sportsmanship Award, as voted on by student-athletes and coaches.

On the men’s side, the Govs finished ninth at the OVC Championships, with freshman Martin Rejman being the top runner for Austin Peay, with three top-10 finishes overall during the regular season.

In soccer, the Lady Govs finished with a record of 11-6-2 overall and made it to the semi-finals of the OVC tournament – where junior Shelby Olszewski and freshman Gina Fabbro earned all-tournament team honors..

The Lady Govs volleyball team finished with a deceptive 13-22 record this year, due in part to the toughest pre-conference schedule in the OVC, but also with the injury to their leading offensive player for a third of the season in junior Jada Stotts.

The Lady Govs would make it to the semi-finals of the OVC Championship Tournament, where they took regular-season and ultimate tournament champion Morehead State University to the brink in five game loss.

Finally, football had the toughest go of all the fall sports at Austin Peay finishing winless at 0-12, but having to open the season with five straight road games – including Southeastern Conference members University of Tennessee and Vanderbilt University.

Add Mid-American Conference member Ohio University and that gave the Govs three game against FBS level teams – one of only three FCS schools to play that many FBS teams – to it their schedule one of the toughest in the country and the toughest of all the OVC teams.

Overall, the Govs only had four home games and were the last college team in the country to play a home game – that finally coming on October 10th versus Eastern Illinois University. 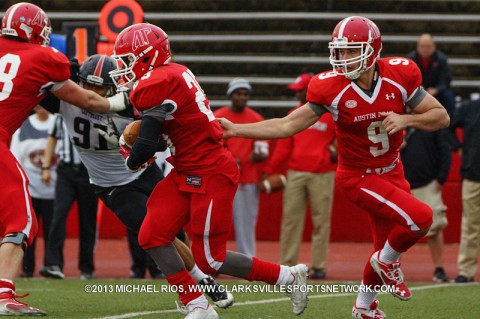 Their record eight road games also included the largest crowd to see a Governors football game with an attendance of 97,169 at the Tennessee contest in Knoxville, TN.

Overall, the biggest news around the football program may have come as some as the final horn had sounded at the Govs final home game, as demolition began almost immediately on Governors Stadium — with 16.9 million dollars of renovations to be done to the facility.

So now, Fall 2013 is in the books for the Govs and Lady Govs and it’s on to basketball and indoor track for the next couple of months, as old man winter makes his return.