Nashville, TN – The Tennessee Bureau of Investigation today arrested a Robertson County woman after an investigation revealed that she was running a scheme involving Wal-Mart and Straightalk phone cards resulting in her stealing more than $200,000.

Last month, the Robertson County grand jury indicted 21-year-old Alexandrea Petty, of Springfield Tennessee, on one count of theft over $60,000. 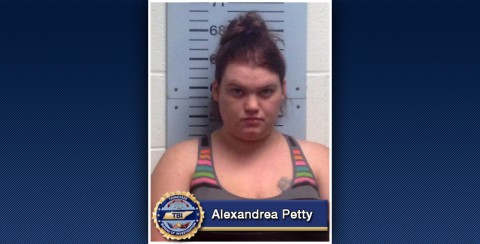 On several occasions between June 2012 and October 2013, Petty acted like a Wal-Mart supervisor and called Tracfone to activate stolen Straightalk phone cards by verifying times the activation system was down.

Petty then sold the cards at a discounted rate to various people throughout Robertson County or returned the cards to Wal-Mart to receive a refund.

The loss to Wal-Mart is approximately $18,000 for the returned cards and Tracfone, which owns Straightalk, lost nearly $215,000 for the falsely activated minutes.

Petty was taken into custody this morning at her parent’s Springfield home and booked into the Robertson County Jail on $10,000.