Currently, each Special Forces group has an Unmanned Aircraft Systems (UAS) platoon consisting of the RQ-7 Shadow, designed to provide UAS support at the brigade level. The MQ-1C Gray Eagle brings more capability to the fight, and is able to support at the Theater Special Operations Command level. 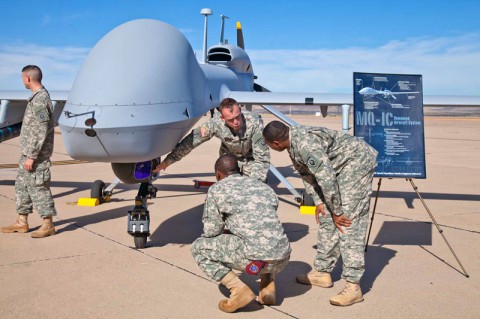 “The Shadow is geared towards a specific area of operations,” explained Guenther. “The Gray Eagle can go anywhere; it has greater endurance and a larger range.”

The Gray Eagle can also carry multiple payloads, including radars, signals intelligence, Hellfire missiles and a camera with high definition resolution, which Guenther says provides such high quality, that “at 15,000 feet you can read a license plate.”

The significance of this, Anderson explains, is the Gray Eagle provides simultaneous real-time situational awareness for immediate action, while gathering intelligence data for targeting and mission planning products.

“It provides information for immediate use, while also capturing data that can be analyzed, fused with multiple other intelligence sources, and stored for reference supporting future targeting and forensic applications,” he said. “Products are detailed enough that operators conducting mission planning can look at a wall they have to scale and know what size ladder they need to bring.”

E Co., 160th SOAR (A), is temporarily stationed at Fort Huachuca, AZ, until military construction to house them is complete at Fort Campbell, KY. The new company is authorized roughly 165 people and 12 Gray Eagles.

At the activation ceremony November 19th, 160th SOAR (A) Regimental Commander Col. John Evans praised their potential, saying “we have a long history of SOF rotary wing expertise. We will add to that lethality the capabilities brought to us by UAS.”

Additionally, Soldiers will receive SOF specific training on tactics, techniques and procedures (TTPs) and capabilities conventional Army UAS units do not have.

The impact of a UAS company organic to Army Special Operations Aviation is significant, explains Rousseau.

“We understand how the Helicopter Assault Force works,” he said. “We will be able to tie in easily during joint missions, and will know what to expect when it comes to any mission conducted with other 160th assets.”